Termagants come standard with a Fleshborer for 5 points. They have 3 weapon upgrades, Spinefist at 1 point, Spike Rifle at 1 point and Devourer at 5 points. Two of these, I would argue are really weapon down grades. Let me show you why:

30 Termagaunts shooting MEQ’s with Spinefists, hit half the time, and reroll their misses, 22.5 hits. Toughness 4/Strength 3 they wounds 1 out of 3 times, 7.5 wounds. The average space marine will save 2 out of 3. Average shooting from these Termagaunts will kill 2.5 MEQ. 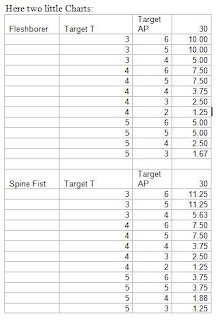 As you can see there is no improvement for spending one extra point on Spinefists. The unit did however cost 30 points more over the stock standard 30 man Termagaunts unit.

The only times Spinefists do better are against toughness 3 targets, where best case scenario, your 30 points buy you 1.25 extra kills.

Spike Rifles give you an extra 6” range at the cost of 1 point, and a significant reduction in damage potential, as seen in the chart below: 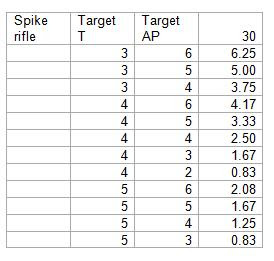 Devourers, at a cost of 5 points each, will give a significant boost in damage potential, but doubling your squad cost to 300 points, from 150. As seen in the chart below: 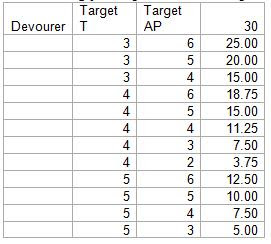 Your Devourer squad will outshoot 2 30-man stock Termagaunts, yet I am sure the average Tyranid player would rather have a few less shots and double the wounds.

All in all, I can’t think of any occasion that would warrant using anything but the stock Termagaunt weapons.