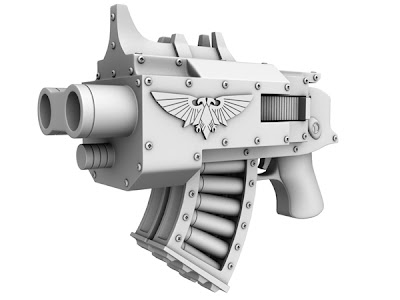 I keep running into this nugget all over the place, and basically I wanted to make sure folks have a little perspective on this:

What's the difference between a normal storm bolter and one with psy-bolts added?

So, as you can already tell, neither load out is exactly frightening. Granted, attaching psy bolts increases the effective killing power versus marines of a storm bolter by about 35%, let's put that in perspective.

Any given Storm Bolter w/ Psybolts ( 2 shots ) has a 27.8% chance to kill at least one Space Marine.

So, here's some perspective. How many "less" Storm Bolters will psy-storm bolters require to reliably kill the same amount of normal Storm Bolters?

Well, we need to define "reliable". Let's say that reliable = 75% chance of success. This means that 3 out of every 4 times you try it, it works.

So, here's the rephrase. How many Storm Bolters and Psy-Storm Bolters will each respectively take to reliably (75% chance) to kill at least one marine?

To figure this out, you calculate your odds of killing nothing and subtract that from one. (Dirty statistics will tell you it takes 9 shots). The actual answer is approximately 13 shots to reliably kill one Space Marine, that's 6 and a half Grey Knights firing just to reliably take down one dude. (Have some perspective here as to why I'm not a huge fan of the supposed Grey Knight Pew Pew tactic from Storm Bolters.)

For a Psy-Storm Bolter? The answer is 9 shots. So, that's 4 and a half Grey Knights firing to reliably take down one dude.

My overall point? Clearly, neither of these load outs is all that effective at killing marines.

P.S. Don't even bother shooting at something with FnP. :)
Posted by Neil Gilstrap at 7:54 AM