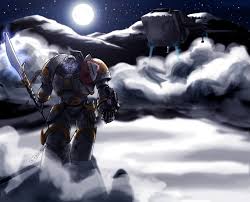 As I said in the previous article, there are a ton of Red Herrings in the Grey Knight dex that for most armies only serve as a distraction. This does not hold true for certain armies like Orks, Tyranids, Demons, and sometimes Dark Eldar. However, for the mass of Space Marine variant players out there, here’s the list of Red Herrings.

Force Weapons – The fact of the matter is that Strike Squads are weak in Assault. Purifiers are substantially better. The bottom line is, they have Power Weapons and that is what most Marines care about. They are also Strength 5 Power Weapons. This is somewhat concerning to many MEQ players because you want to avoid assault, but how hard is that to do, really? Since Grey Knights die just like any other Marine, you can soften them up substantially before they get to you, and then, they aren’t so bad when they lack attacks. Grey Knights players, just in general, do not build their list around those Force Weapons, even the I6 ones. It’s a consideration, certainly, but not a place where they truly derive power.

Grenades – Once again, just like the Force Weapons, this is an assault based element of the Grey Knights. Grenades for Grey Knights just make already existing Death Stars even more of a Death Star. Usually it’s overkill. This may frustrate you immeasurably with your own Death Star units, but the real power is that Grey Knights are just exceptional at defeating Death Stars, grenades or no. Once again, it’s time to rethink those hammer lists.

Grand Strategy – This is the ability a Grand Master uses to make certain units outflank, scout, score, or what have you. Although you could potentially be tricky with this, you could also roll a 1 and only get to manipulate one unit. More often than not, the GK player is using Grand Strategy only because he took the GM for Grenades OR because he took Draigo/Mordrak. They don’t build their lists around this ability because it’s not very reliable.

Shrouding/Sanctuary – Shrouding is a big issue for some players. However, as a Grey Knight player who uses a Librarian, the upgrade from a 4+ to a 3+ isn’t that substantial. It’s Fortitude (see the 3+ save I get from Fortitude + Cover already) that really pays the bills. You can also hood me or as a Puppy player, Rune Priest me which has to be THE most annoying thing to fight against. The fact is, quit trying to out Mech me with your Marines. You can’t. What you need to be focusing on is denying me cover, not worrying about Shrouding. Or just shutting down Psychic powers. Sanctuary, although annoying, is not usually a game changer. It is if you rely on big Death Stars, which I’ve already told you to stop running.

Warp Quake – Yes, this can be a game changer versus Drop Pod armies, DDMs, Demons, and DoA lists. If the GK player gets first turn. If he doesn’t fail the roll or perils at an inopportune time. Warp Quake is somewhat of a safety blanket for some GK builds. However, with experience, I know that over the course of a game, its usefulness obviously wanes. If your desired army will rely very heavily on Deep Striking, you need to consider its effects, especially if you are slow. (Looking at your Fatecrusher builds). Otherwise, just plan accordingly.

All of the Red Herrings have a commonality in unreliability. Force Weapons aren’t that reliable if you aren’t getting the assault or if you need to Hammerhand. (Or just roll bad!) Grenades are generally overkill and only truly needed against certain units. Warp Quake is only good if you are a heavy deep striker.

There are 4 basic variations on the Grey Knights list types for one to consider. Ideally, your thoughts on how to best use your army to defeat Grey Knights will address at least some aspects of each of these 4 lists. Three of these lists leverage the power of the GK dex as I described in the last article in one form or another. You should be able to see how some of those elements apply to each of these generic list types.

It’s important to know the archetypes because this will give you a foundation for consideration when looking at how to build your own list. Rather than sitting around going, “THEY COULD BRING ANYTHING!”, you can use these archetypes to help direct your thinking.

For lack of a better way to describe it, the Grey Knight MSU build places many small Strike Squads, Purifiers, or both generally into Rhinos and/or Psybacks. These lists are also usually backed up in the Heavy Support section by Psybolt Dreadnoughts. Headquarter selections may vary greatly from Librarians, to Grand Masters, to Coteaz, and of course, Crowe. Librarians bring Shrouding and Psychic Defense. Grand Masters can bring Grenades and the Grand Strategy ability to add some scouting, scoring, or outflanking shenanigans. Coteaz bring the sieze reroll and sometimes bring the ability to pack the Troop choice with some cheap acolytes or possibly a Death Cult squad. He also bring Sanctuary and the “I’ve Been Expecting You” rule. Lastly, Crowe allows the MSU Grey Knight builder to use his Purifiers as Troop choices.

Lastly, these MSU squads will generally be equipped with a Demon Hammer and Psycannons.

The intent of this list is to clearly exercise several of the true Grey Knight strengths listed previously. It packs in Vehicles, maximizing Fortitude and general GK mech dominance, Psybolt Dreads, Duality, and of course, a plethora of anti-tank capability in Hammers and Psycannons.

Primarily, this type of list relies mostly on Duality with a special emphasis on destroying AV 10 – 11 Mech.

This type of list forgoes the strength of being able to take down Death Stars. It doesn’t have much a counter-attack element. Indeed, this list, overall, is decently weak in Assault save for Purifiers heavy lists which may be armed with Halbreds. Still, Halbreds aren’t much of a threat to models with a 3++. Also, in assault, they have no real defense versus a “Horde”, once again unless it’s Purifiers with Cleansing Flame.

Very similar to a lot of Blood Angel builds you might see, Grey Knights have the ability to pack in some Death Stars into Storm Ravens and Land Raiders to come at you. These lists will attempt to generally leverage Librarians, Grenades, Assassins, Purifiers, Dreads, and potentially Terminators. The good news here is that if you are already quite adept at fighting against these kinds of Blood Angel lists, these are functionally the same thing.

The large variation in list types here depends on the type of Death Star the GK player wants to use. Some like Death Cultists with Crusaders. Some like big Purifier squads. Some like Paladin squads or Terminators. They use Grenades on Techmarines, Xenos Inquisitors, or GMs, to bolster their Death Stars.

Basically, the kind of list eschews most of the actual strengths of GKs in favor of just running the plain old rock list that a lot of other codices can do just as well. It adds GK flavor by sprinkling some cheap troops, some Psybolt Dreads, etc. Basically, though, it has the same strengths and weaknesses of any Death Star/Rock List backed up by some ranged shooting.

Nothing really special to consider here above and beyond what you should already be considering in how to deal with rock lists.

Posted by Neil Gilstrap at 9:26 AM