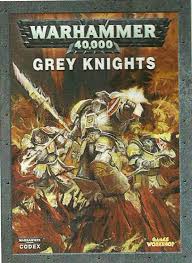 This is Part 3 of a series.

The third common type of Grey Knight list is the Draigowing. The concept behind this list is to leverage the Paladin’s uniqueness as a rock style unit and of course, Draigo. These types of lists will focus on getting you to focus on Paladins. From there, the actual goal should be to claim objectives or win on kill points. This list was really made famous by Blackmoor’s performance at the NoVA 2011, but there are key reasons for that which I covered in another article. In general, to think about defeating a Draigowing, the worst mistake you can make is assume that the general “this is how you beat a rock list” strategies are all that apply. There is some common wisdom there, but Draigowing’s bring a lot more to the table than the standard rock style list.

10 x Interceptors (Blackmoor wisely chose this unit and I think they are great for this list, but not necessarily common)

First, to briefly analyze the list, let’s analyze some of the key elements this list brings as well as the Grey Knight strengths that it leverages. First, with so few squads, Draigo’s Grand Strategy will be good to make something like Interceptors an additional scoring unit if needed. Otherwise, the ability is just marginally useful and is a Red Herring as described. The Librarian, however, is almost a requirement. The reason is psychic defense, Shrouding, and Might of Titan. Clearly, the biggest weakness of a Paladin is the lack of a 3++ like other Terminators. Shrouding will fix this against shooting attacks so long as the Paladins are in cover. Might of Titan also shores up another big weakness which is potentially getting bogged down by Dreadnoughts or other walkers. Yes, the Paladins can Hammerhand up to S10 with hammers, but they still only get 2 attacks, and that doesn’t strike fear at all into a Venerable Dreadnought.

The most self-defeating thing you can do is say, “oh this is just another newb rock list.” This list actually leverages some true GK strengths that other rocks cannot. For starters, the 4 Psycannons. How many rock units bring a set of guns that are almost guaranteed to take down a Land Raider at 24 inches? How many rock units can lay down that plus 6 Storm Bolters in anti-infantry defense and before they charge another rock unit? How many rock units can wound allocate an ENTIRE squad without spending a ridiculous amount of points?

Not only can Paladins dominate most units in assault, they can out-shoot most units as well. And lastly, the wisdom in taking the 10 man squads is because you can always combat squad in objective games, but in KP games, you can deny KP like crazy.

This type of list leverages the Paladin, Anti-Hammer/Counter-Assault, and Duality as great strength. It also packs in a lot of very noticeable weaknesses like lack of fearless, ability to be double-tapped out, etc. The problem that I always see though is that it’s easy to “arm-chair general” those weaknesses, but people don’t actually put thought into their list to actually accomplish those goals.

Similar to Grey Knight MSU, Henchmen MSU leverages similar principles but does so using the extremely points efficient henchmen squads. In my opinion, these are the most devastating and optimized Grey Knight lists for the meta. These lists will look something like this:

Libby or GM or OXI or even OXM w/ Terminator Armor

1-2 Servitor Squads in Chimeras with Multi-Meltas, Plasma, etc. (depends on # of inquisitors)

Now, I don’t say “makes the best GK lists” lightly. The reason why I’m really saying this is because, outside of Paladins, these lists leverage every Grey Knight strength. It packs in vehicle spam with Psybacks, leveraging Fortitude, it packs in Psybolt Dreads, combined packing in a more than average amount of anti-vehicle and anti-infantry fire, and Death Cultists/Purifiers make for a crazy good counter-assault element. Let’s face it, this is like running Imperial Guard except in an alternate dimension where Ogyrns are Terminators killing machines.

The other thing about this list is that since so little points is put into any one unit, you can continuously pack in more and more units. For example, Acolyte squads are so cheap, you could easily see lists containing 9-10 Psybacks and still have 3 Psybolt Dreads. Or, you could easily see a list containing 6 Psybacks and 6 Psybolt Dreads AND still have enough Death Cultists in it to swat aside any assault unit.

The big thing to notice about this kind of list, though, is that it, like Imperial Guard, is entirely reliant on its vehicles. Take down the vehicles, and they have a problem. Recently, I’ve been getting a chuckle out of the idea that Tau are actually a good match-up for this kind of list, and it’s true! Think about how much damage 9 Broadsides with Target Locks would do to this list!

Also, as an aside, the worst plan EVER is to assume you are just going to march up there with a bunch of Terminators like you can with Guard and stomp face. Death Cult Assassins, even in small numbers, backed up by Hammerhand, will utterly annihilate you. You will have to think outside the box.

Putting it all Together

So, now, I’ve covered the 4 basic GK list archetypes. Honestly, the only other type of list you will likely see are simply non-optimized versions of these lists. You might see something like BIG Purifier squads or multiple small Paladin units. If you plan to beat these more optimized versions, those lists shouldn’t be much of a threat.

So, hopefully your mind is in the right spot now when considering your way forward. Here are some key points to trigger off of when building your lists to take into account the Grey Knight scourge:

1) Do you have an actual plan in your list for Paladins? To kill them? Ignore them? Stall them? Not an arm-chair general plan, but A PLAN.

2) Can you safely ignore or deal with 6-9 Psybacks in cover, with fortitude without having your lunch money taken? Makes those Razorspam lists not look so good doesn’t it?

3) If you are relying on a few vehicles, do you have an answer to shut down Psybolt Dreadnoughts QUICKLY?

4) Can you beat a Mech Guard list that has the most broken, over-powered assault unit in the game to back it up? (Hint: stop trying to use Hammer lists. They don’t work :P)

5) Did you bring any Psychic defense?

Here’s a Black Templar list I really badly want to build. I’ll explain why I think it would be great for the current GK Heavy scene. I’m not completely satisfied with the list yet, but I wanted to share the direction I am going with it as it pertains to this conversation.

Emperor’s Champion – With Uphold or Suffer Not

And more points to go probably into either another command squad or Drop Pods/Rhinos for the troop choices. Maybe 3 Land Speeders. Etc.

So, why would I want this to play Grey Knights with?

First, this list brings 16 S9 anti-vehicle shots. S9 means Dreadnought killing and Razorback smashing. The shots are also dispersed across multiple infantry squads which are packing a 2+ save. This basically means that I will be able to out-shoot most GK vehicle heavy lists, and I am bringing a ridiculous amount of fire power to overwhelm cover + fortitude.

This list does not attempt to assault. It attempts to “out last” the enemy at range. Thus, I don’t need to sweat the counter-assault potential of a GK list. You want some? Come and get it because I’m not coming to get my face chewed off by Death Cultists or Purifiers.

If it has to fight a Hammer style list, it can easily bust up Land Raiders and Storm Chickens at range, and if I have to tango with a Dreadnought, S9 Power Fists FTW. Possibly, if I take Uphold, it’s Preferred Enemy S9 Power Fists. If I take Suffer Not, that’s S10 Power Fists.

Against Paladins, I have a veritable cornucopia of S8+ shooting. Just with this concept list, 19 shots with more to come when the list is done. So, I can trade shots with them for a couple of turns to soften them up to either make them hit less hard or eventually to assault big with a bunch of Powerfists once they are whittled down.

What I wish I had in this list is some psychic defense. But, Templar can’t have that. I also wish I had some more resiliency in my Troop choices. That may come with points though in the form of Rhinos, melta guns, Drop Pods, etc.

Can this list beat Guard? Absolutely. It will outshoot Guard off the table.

Now, that’s just an example of the kind of thinking that you need to be having. In the next few articles, I’m going to dive into every Codex and discuss the types of lists that will stack up well versus GK or give you the honest truth if your dex doesn’t have a prayer.