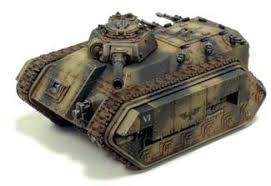 I’ve already hinted at many of the elements that are effective against Grey Knights. These include things like higher than 11 armor values, to avoid traditional hammer lists, to quickly dispatch Dreadnoughts, to plan around range manipulation, and a few more. What I’m going to do now is discuss how to put all of these elements together into a cohesive list building approach that will up your game versus Grey Knights. These approaches can then be used to list build around the problems areas and to leverage your strengths versus their weaknesses.

An approach, better called a strategic approach in this case, is simply a game plan that one might run with that combines list building with game play tactics. This is an important distinction because as with any good list building technique, you should be combining your codex with the rules to match units with tactics. It’s also worth noting that not all strategic approaches will apply to all codices. I will try and point this out as I move through them.

A Note on Approaches

A strategic approach should not be thought of as a way to table your opponent. It is thought of as a way to win a game of 40K. This may involve winning on objectives, kill points, or other conditions. Grey Knights can of course be tabled like anyone else, but many of the approaches I am going to discuss revolve around winning objectives or kill points rather than just kill your opponent.

Several armies can bring quite a bit of AV 12+ to the party which severely hampers the average GK build. This obviously leverages the GK weakness of most of their long range shooting being moderately ineffective versus those armor types. Armies which can successfully build these kinds of lists can bring AV 12 vehicles in large amounts and effectively lay down fire power. Since a lot of GK builds do bring melee weapons which can crack these types of armor, one key point is that your AV 12+ build should either be bringing an even more lethal amount of short range fire power, assault power, or just simply have the ability to dual at range. Here are the key points to this approach:

- Bring an effective answer to kill 1-2 Psybolt Dreadnoughts in the first turn or two. You don’t need to kill them all, but taking a couple down will severely limit the GK ability to take you down.

- Has the ability to trade blows at a range of greater than or equal to 24 inches for several turns with the GK player.

- Has an effective “hammer slammer”. A hammer slammer is a unit or combination which is extremely effective at annihilating an enemy hammer unit like a group of Terminators, Thunder Lords etc. This might be a plasma toting squad, your own Terminators, etc.

Let’s work our way down the list of key points to this approach. The first should be obvious. It isn’t an AV 12+ approach if you don’t have a lot of AV 12+ vehicles. This could be Dreads, Chimeras, Wave Serpents, Predators, Land Raiders, and now, many Necron vehicles. The critical point here is that you need a bunch of them, not one or two. One of the first failings in this strategy will be to assume that you can run a Land Raider or two and then fill out the rest of your force with Razorbacks. This doesn’t work for two critical reasons. First, whatever is inside your Land Raider is probably very easy to counter with a group of Death Cult Assassins. Second, your Land Raiders can be managed by Psycannons or the odd melta gun leaving the biggest threat being you’re very easy to kill Razorbacks which is what the smart GK will focus on.

The second point is quite possibly the most critical. Your list or game plan needs something in it that can reasonably shut down a Dread or two very early in the game. The point is, the quicker the Dreads die, the more survivable your AV 12+ becomes. This becomes even truer if your game plan can leverage a long distance shooting game versus the GKs which outstrips their 24 inch base range for most of the fight. You can basically kite them once the Dread is dead (kiting being an MMO term which means running and shooting so that the enemy can never catch you and eventually dies). A plan for killing Dreads will vary from army to army. For example, Eldar might just suicide some Fire Dragons into them. Guard might just use a couple Manticores to get the job done or simply point a mass of Hydras and Vendettas at them for a turn. Blood Angels might put all their Lascannons into them for a turn or leverage something sneaky like Vanguard or a DoA bomb.

The next point attempts to leverage that most GK fire power is 24 inch range that is capable of really killing tanks. Sure, Psybacks can kill tanks, but they can barely dent armor 12+. So, we are talking now about having to deal with Psycannons. Now, not only do they need 6’s to penetrate your vehicle wall, they have to get to a shorter range to do it. Thus, the critical piece here is as stated above, kill some Dreads right away. Now, vehicles that can move and still fire become priceless. Take a Blood Angel predator as an example. Being able to back up 6 inches and still fire all of your guns mean that you can start and stay out of GK Psycannon range for quite a few turns, constantly doing damage to them.

The next point needs a little clarification as to the purpose. The basics of what I’m trying to state is that if your army can simply hang at range and blow the GKs off the table, do it! This is especially true if you can shut the Dreads down early. Basically, though, the only army I know that has a prayer of this is Guard. For everyone else, note that if you have to get close to them to lay the hammer down, say to claim objectives, make sure you bring something that is very effective at killing marines close in. Basically, you don’t want to get close, kill a couple, then, have your precious AV 12+ vehicle take a Hammer to the face. Either way, this kind of consideration is basically for objective games. You will at some point have to close with the enemy to take objectives. My advice then is to carry just a couple things that can easily clear one objective while you contest the rest. For example, a troupe of plasma gunners.

The only reason I’m telling you that you need an effective Hammer Slammer is to fight against other armies other than GKs. The biggest weakness of most of these kinds of stand-off, shooty lists is a solid hammer like a Thunder Lord crushing you. Bring something that you can repel them with. This will also help if you play a more off-center GK list like with Mordrak, some Terminators, or possibly a small Paladin squad. Guard basically have no options here as is their main weakness in the book, but books like Blood Angels and even Eldar certainly do have some options.

Next article, I will continue into another strategic approach which I’ll call the “durability” or “out last” approach. To wrap up, I’ll talk briefly about yet another codex and ways it can handle Grey Knights.

So, the biggest thing about the Space Pups is that they have spent a couple years now being top dog, with little to no bad match-ups save for Guard. Usually, a Space Wolf Player’s biggest concern was another Space Wolf player. Times, they have changed! The biggest piece of advice I can give a Space Wolf player is that it’s time to re-examine the way you have been playing and instead of just assuming that you will out shoot everyone with Razor Spam and Long Fangs, that you are actually going to have to use some other parts of your codex now. Grey Knights Book > Space Wolves Book in general. Hate to call it, but it’s true. The quicker we start to accept that the better off we will be as Wolf players. However, there are still many things a Wolf codex can do to Grey Knight player. The point is that a lot of these kinds of “small” things would have been overlooked previously because Space Wolf players were simply used to dominating with their own “over-powered” codex.

Let’s start with NJal. I’m not going to lie, Njal is beast versus GKs. The biggest use for him would be to stuff him in a small squad, in a Rhino, in mid-field. Since GKs are mostly a 24 inch army (see scouts below to handle Dreads), they will come into that sweet 3+ denial range. Then, in late game, when the storm is ready to really rage, charge him forward and deposit him for max damage. I really think every Space Wolf player should seriously start considering Njal, maybe even as a must take. At a minimum, you will need a Rune Priest.

Start seriously considering taking scout squads with melta bombs. This is heresy, I know, but 2 scout squads with melta bombs are a total PITA for a Grey Knight player because it leaves his Dreads exposed. In fact, Wolf Scouts can be so disruptive for the typical GK gun line that it might be worth taking even more. Sure, they will get chopped up by Purifiers, but they actually fight just fine versus Strike Squads. Furthermore, if they bag a Dread or 2, it’s totally worth it.

Likewise, Lone Wolves are EXTREMELY annoying to a GK player. Why? 2+ Save, Eternal, and FnP. A GK player has to dump a lot of precious fire power into them to make them stop advancing, and each shot is a Long Fang or Razorback that didn’t get tagged. Also, because a Lone Wolf can easily stand up to a small Strike Squad or Purifier Squad, and he can easily wreck Dreads, Land Raiders, you name it.

The biggest mistake right now I think a Wolf Player can make is to try and run Thunder Cav. I know they are cool, and they are so darn effective against almost everything. However, they are dog meat to a squad of Death Cultists. The only realistic way you will make these work versus a seasoned GK player is if you somehow bring enough guns to kill the DCA before your dogs get there. Good luck with that!

Another big tip I have for Wolf players is to play a lot more defensively than you are used to. Fact is, if you are in mid-board, the GK player is going to have a hard time dislodging you, and frankly, your Wolf boys can tackle most GKs in assault, even with their power weapons. This is especially true with someone like Njal shutting down those hammerhands.

Razorspam still works! But only with a Rune Priest there (preferably Njal) to stop Fortitude rolls. Then, you got a game. Right now, were I to run a Wolfy Razor List, it would probably look like this:

Otherwise, I would even be really tempted to run the Missile Spam Logan Wing lists which I can talk about a little with the next strategic approach.

Posted by Neil Gilstrap at 1:14 PM