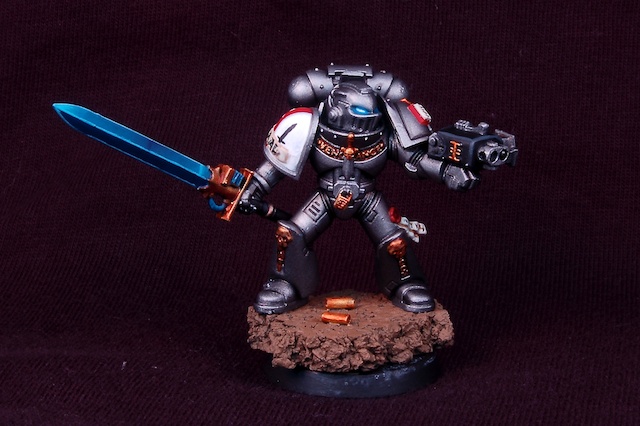 Two of the weaknesses found in the typical Grey Knight that were previously discussed were the lack of AP 1 & 2 weapons as well as lack of significant ranged fire. When we combine these two thought processes, we land on a strategic list building approach which can leverage both of those weaknesses to create a list theory which will rely on simply outlasting the Grey Knights, and the way in which that will be accomplished is by combining durability and range to create a long-term, or sustained game, in which you can whittle the Grey Knight player down. Over many game turns, eventually, you can either overcome them or chop them down to size so that you are on equal footing and able to compete in any mission type.

So, what will this approach look like? It will either generate a superior durability or combine moderate durability with fire reduction principles and playing the missions. Let’s talk about what this means in general before getting to the approach punch list.

The first thing that should come to mind is a 2+ save. Before we even consider rolls to hit and wounds, a 2+ save immediately reduces all incoming fire power from Grey Knight armies by 83%. The reason why is that Grey Knights just don’t have any AP 2 guns. Continuing that thought, you don’t really need Storm Shields unless you plan on engaging the Grey Knights in Assault where their Power Weapons can now be leverage. See, a Grey Knight player, if faced with having to take down 2+ save models in mass would prefer to assault you UNLESS you also have storm shield. In that case, shy of Death Cult Assassins, he doesn’t have a lot of options for easily taking you down. This line of thinking is getting way off course, but it is worth handling upfront.

What I really want to point out is how good a 2+ save is versus Grey Knight shooting. However, it isn’t THAT great. Grey Knight armies generally lay down some ferocious anti-infantry fire. A 2+ save will help tremendously, but it isn’t enough by itself to have superior durability. The reason why is that a model with a 2+ generally also has a very high price in points.

See, durability should not be measured in terms how survivable a given model is. It should also be measured in the quantity of models. The easy way to think about this is that a single Marine is fairly durable in terms of the 40K universe. However, 10 Marines in a squad is very durable. 10 Plague Marines are SUPER durable with a 3+, 5 toughness, and FnP. Digging deeper, a single Plague Marine isn’t as durable as 2 Space Marines. However, 10 Plague Marines is way more durable than 10 Space marines. Get where I’m going with this? Think about how durable a 30 man Ork mob is in cover. Even more than Plague Marines!

Having a few models with a 2+ save is great! Having 30 of them would make you have superior durability. Now, there aren’t too many lists that can pack those kinds of numbers.

We need SUPERIOR durability. To do this, we need to combine quality and quantity into the most efficient anti-infantry shirking force we can. This should combine elements like FnP, a decent save, rerolls, unit size, wound allocation, special rules, and a mass of other things to create durability.

The last thing to consider here is that durability should also be measured in your ability to reduce the incoming fire power throughout all turns. For example, my standard GK lists can usually down around 13 MEQs on average a turn. That’s great at full bore! However, if you are shooting back at me, and I’m taking casualties, I should stay at full firing power for very long. When my fire power starts going down, your durability goes up. Get it?

This concept leads into the next discussion…

Because reducing enemy fire makes you more durable, most lists will need to incorporate the kinds of fire power which will seek to reduce the firing potential of the Grey Knight list. This could take on many forms. For example, manipulating the effective 24 inch range of a Grey Knight player is Fire Reduction. If your army can stay out of the 24 inch bubble, you are severely reducing the ability of the GK player to kill you.

Fire Reduction could also be specifically taking units which, even if suicidal, will significantly reduce the enemy’s fire effectiveness. For example, a DDM (Dreadnought in a Drop Pod with a Multi Melta) is generally designed in most lists to serve this roll. (I don’t actually think they are very good at it, but the point is easy to make.) They drop in, pop something nasty, then die. In the case of a Grey Knight player, that suicide drop would probably be against a Psybolt Dread, which isn’t a bad trade provided you kill it.

Fire Reduction could also just purely be lots of “pew pew” on your end. After all, if the GK player is taking losses, his fire power is being reduced, right?

It could simply be hiding out of LoS. That one is easy if you play with enough terrain.

The goal of Fire Reduction is to mitigate the casualties you take throughout the game. This increases your durability. The long you know you will be in the game allows you to manipulate the final point which is…

Playing to the Mission

The last goal of this approach will be to play the mission. This might mean playing the length of the mission, taking a few losses, and then leaping out on turn 5 to claim/contest some objectives, and win. It might be killing a few Grey Knight Razorbacks to claim some easy KPs then run like a school girl to hide in the corner.

The longer your army can stay near max efficiency, the more options you will have late game to play to the mission.

The Sustained Approach isn’t going to be the cup of tea for everyone out there. So many of us play this game for the carnage and dramatic battles aspect. The sustained approach is generally more like the slow, plodding, turtle approach. It wins races, but it doesn’t generally look good doing it.

That doesn’t mean that there aren’t some armies which can leverage the sustained approach very well versus Grey Knights and still do a lot of damage. Black Templar come to mind here as does Guard, of course. Demons also come to mind, in some ways. However, many effective sustained approaches might end up being kind of boring looking like Blood Angel gun lines, MEQ Hordes, or others.

Key Points to the Sustained Approach

- You need to achieve superior durability. Do this through either staying out of line of sight, providing a QUANTITY of survivable models, or a combination of withering fire power and survivability. Examples: A MEQ horde with durable fire support like a Blood Angel MEQ horde with FnP, or a Space Marine horde in general. A bucket load of gaunts, so thick as to be impassable. An army of terminators. Even better, an army of terminators with Feel no Pain. A blocking, suicidal, or fierce army with just a few elements which can be killed due to LoS or target saturation that will win in the end.

- It is highly preferable to achieve some kind of withering and sustained fire power. Think 10 man squad of Devastators with FnP in cover. They will be shooting for most of the game and require a ton of fire to silence. They are generally pretty good for silencing one GK gun a turn. Vehicles or units that can fire over 24 inches and stay out of prime GK fire range are also good examples.

- You need to be able to play to the basic mission types of Kill Points and Seize Ground. So, that means you need a way to mitigate your KPs in a KP scenario and also able to claim late game objectives or contest. Remember that a lot of GK lists function best as MSU lists and thus also give up a lot of KPs. This could be part of your strategy.

- Mobility is generally key to this kind of list type. You need to be able to move, not early in the game but LATE in the game. That’s the hard part.

I realize that the discussion behind this approach has been fairly cerebral. So, here’s some examples.

I had a list concept running for a while which combines small squads of Guardian Jetbikes who provide a durable element by going into reserve, then using JSJ to stay out of LoS. It achieves superior durability because the other 75%+ of the points going into hyper-directed suicide units designed to cripple the effective shooting elements in an army. Think fire dragons, warlocks, etc. whose job it is to make a mess of the enemy for 3-4 turns which when the dust settles leaves them with little to shoot at bikes with. This achieves superior durability through target priority and list.

Think about how hard it would be to kill 70 or so Marines if you had nothing to do it with but Storm Bolters. Exactly. Grey Knights will want to assault this kind of list, but you can mitigate that with speed bumps, rhinos, your own counter-assault elements, etc. Make sure that some of this Horde can plink some long range shots to slowly whittle down enemy vehicles and also stop a Land Raider, and you got yourself superior durability. The key here is to focus on winning the mission, not killing the enemy.

Here’s a great specific example. Black Templar have the ability to take 4-5 squads of Terminators with Tank Hunter Cyclones. This is great because it combines a lot of 2+ save bodies and sustained fire reduction. You will be killing a few GK vehicles a turn, while staying away from the enemy to leverage your 2+ save. You don’t need storm shields because you will avoid combat. It also has storm bolters so you can return the favor and whittle down GK squads.

The relatively not hungry Nid horde / not so WAAAGHY Ork Horde

Say what? You know how most Nid players think “CHARGE!” What if you thought, “sit in mid and make them come to me while I hide and/or spawn a bajillion termagaunts?” This goes for Orks too. Every tried shooting up an Ork mob that goes to ground in cover? It laughs at you. You’ll need a plan to manage Purifiers, though. So, keep that in mind. Nids are better at this than Orks when it comes to GKs. Orks, though can manage the suicide bit similar to the ‘Dar above much better, though.

At the end of the day, what most MSU Grey Knight lists don’t want to see is an army that can actually absorb all of its fire power. The reason is because they don’t have much to fall back on. Now, this is not true of Grey Knight Hammer Lists, but it is certainly true of the spammy Purifier and MSU lists. The truth is, GKs only bring a mediocre HtH punch to the party with the exception of Death Cultists. So, when you can absorb all that shooting and still make a game out of it, they start to run out of options.

Posted by Neil Gilstrap at 7:53 AM