So, I’m still in the process of building and digesting what will be my Necrons for 2012. Thus far, most Necron discussion and lists I have seen doing well have been doing so, in my opinion, due to gimmicks. What I mean by that is that the list is/was doing well most likely because the opponent had little to no knowledge about the gimmicks. This type of “bear trap”, works great when you play against people who haven’t studied your codex and thus step right into it. When you play against people who know your book as well as you, it’s a whole different ball game.

The best discussion I’ve seen thus far on building that balanced Necron list comes from “The Voice” on the 40KUK blog. Most of the thoughts he suggests I’ve independently started to arrive at myself. Further, his list idea presented there is basically the same kind that I am arriving at. So, by this, I’m stating two things. First, he has beat me to it. Second, it’s another good resource for discussion.

I should also recommend Mike Brandt's recap on the Necron codex on the Whiskey and 40K blog some time ago. This is also reflective of the thoughts I have arrived at, and he beat both Gary and I to the punch so far!

Before starting on my thoughts about how I am going to proceed, let me cover a few bases first.

- A lot of the Necron models I want to play with haven’t released yet. This is SERIOUSLY putting a damper on some more vehicle heavy lists that I want to run because of the lack of a Night Scythe. Hopefully this will get fixed soon. Second, the Wraith has also not been released yet! AAARGH! Because that’s the other unit I really, really need in order to make a list without a Night Scythe work!

- Scarabs only work because people get lucky. The fact is, people have already started figuring out that the easy button way to kill Scarabs is to bubble wrap and kill them in assault. Scarabs get a lot of attacks, but when you need 4’s followed by 5’s, each base of Scarabs only produces about 1 wound on the charge. That means every 3 bases kills a single marine. A dedicated CC unit, usually swinging first, will destroy scarabs.

The other big deal is the terrible need for an FAQ for Necrons. For the record, here’s how I am assuming the rules will be FAQ’ed.

- You will not be allowed to put 2 members of 2 different courts into the same squad. The word “the” in the “the royal court” is intended to mean the entire court, as in both units. I’m 95% sure this will be faq’ed this way otherwise we have the first codex EVER that allows two sergeants in the same squad. If it doesn’t get faq’ed this way, that’s great too as it will give me more options, but I really think it will.

- I expect the chronometron will not be allowed to be used for Imotekh’s night fight. I think this is RaW already as the start of game turn is not a phase, but I digress.

- I actually do not think Writhing Worldscape will stack with Orikan or Tremor Staves. I hope it does! However, I don’t think it will.

So, using that as a basis, let’s move on! 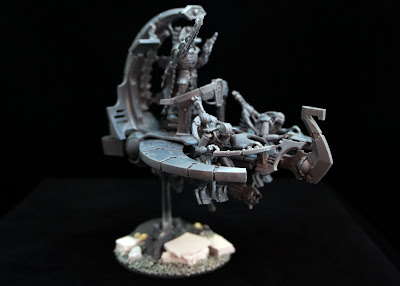 First off, right away, I think Anraykyr in a command barge has got to be one of the best choices out of the slot. I was laughing about him the other day as he is the only unit in 40K that has a chance, albeit ridiculously small, of destroying an entire parking lot, single-handedly, in a single game turn. The short is, he has a GREAT shot at killing 3 tanks in a single turn by doing the following:

- Command Barge Sweep Attack across one vehicle with S7 + 2d6 penetration on the rear armor, hitting on a 4+. He hops out.

- Controls a vehicle during his shooting phase to shoot and destroy another vehicle, highly likely in the rear armor with no cover because you will properly select the right firer.

- Assaults into another vehicle and destroy it with S8 + 2d6 armor penetration on the rear.

However, when I make a movie about Anraykyr and all his awesomeness, here’s what will happen:

- Anraykyr flies over a Vendetta and sweeps it to death, hopping out.

- He snags a Manticore and fires it off into the midst of a IG Chimera parking lot, getting 3 shots that scatter, hitting Chimeras on side armor, rolling 2d6 take the highest armor pen, and exploding, tossing Guardsmen everywhere who break and run.

- Anraykyr assaults the Manticore destroying it. More seriously, the command barge, at least on paper, looks like one of the best units in the dex. Not only did they give you an easy button way to kill tanks, you can even snipe models like Sanguinary Priests or Power Fists, out of a unit. (Or Melta Guns which is important to protect all those 13 armor vehicles!)

What I really want to do in a lot of lists is run Anraykyr in a barge followed up by “Red”, his Necron Overlord buddy in his own barge with warscythe.

However, Imotekh may end up being a better choice. At first, I wasn’t a big fan of Imotekh, but the concept of him has started to grow on me. I’m not saying at this point I will or will not drop “Red”, but play testing will tell. The thing about Imotekh is the lightning. I, more than anyone, know what having to roll “6”’s means. I also know that in the mech heavy environment of 40K, most mech armies bring around 10+ vehicles. This basically means that the lighting attack will hit at least one vehicle a turn with a good chance at 2. Since you won’t get a cover save against it, and it is on side armor, this is a very compelling reason to take him. Since Imotekh can also be hidden, he’s basically like having an unstoppable Long Fang pack that ignores cover in your army. Yes, 225 is a bit much, but not if he snags 4-6 vehicles in a game. The other thing is that it’s roll of the dice. What about the one game where you go totally WILD, roll a bunch of 6’s, and destroy your opponents most important vehicles like Vendettas or Manticores on Turn 1?

The thing about Imotekh is you can’t STOP IT. That’s why this idea is so very compelling. You can’t shut it down. You can’t deflect it or blow it off. The best you can do is smoke your tanks for a turn. Lastly, Imotekh will have a very fancy hole to hide in with Anraykyrs super duper special immortals.

I’m going to have to play test with Imotekh to see if I like him.

To wrap up, I need to discuss the royal court. This one is actually pretty easy:

- You are required to take 2 crypteks with Solar Pulse.

Don’t think about using your pulse at the start of the game, especially if you took Imotekh. Think about using them at the 5th or 6th turn, while you are holding objectives or barely winning on KPs, and now, your opponent can’t see you to do anything about it. Then, think about combo’ing it with this:

- Take 2 crypteks with Veil of Darkness.

I really think any list I take will consist of this. The Veil is just stupid useful for contesting, getting out of trouble, claiming, etc. Without a Night Scythe to work with, this is what you get for mobility.

The only issue now that I am having is running out of points! No matter which route I go, I sink a full third of my army into the HQ slot. Right now, though, this is what I am thinking:

More thoughts to come in another article!

Posted by Neil Gilstrap at 6:06 AM