More thoughts and moving forward with a 'Cron list. Several new things came up over the past few days as I delved deeper into a new list which I think are worth sharing. I'll also hit ever so briefly on the troop choices.
- Imotekh and reserve.
- The Dark Eldar Problem
- The MSU Melta Problem
- The Anni Barge Problem
- Scarab Farm
- Night Scythe
Let's start with the Troop Choices:
Keeping in line with most of the GW codices, the troop choices for the Necron codex really just make you want to cry in some ways.

Seriously, why do some codices get troop choices that actually lift their own weight and others don't?
Some codices get troop choices that are actually useful outside of the transport option they have. (Blood Angels, Space Wolves, Imperial Guard, Tyranids, Orks, etc.) Unfortunately, Necrons are one of those codices where the troop choices are good for little else except their scoring and providing access to their transport.
Now, I realize there is an argument out there for putting a huge block of warriors or immortals on the field and attempting to glance someone to death. I can even one up that and say that doing this with a Veiltek is even better.
At the end of the day though, we need to understand the common baseline here that glancing something, isn't "to death". Indeed, most Grey Knight players are just rubbing their hands together in that evil, maniacal way going... "yes, believe that glancing hits will stop us!"

you are aware we have fortitude right? And that for most armies, we really don't care if you blow the gun off because we can just bum rush and kill you in assault anyways?
My fellow Necron enthusiasts. Please never forget that more Marine players don't need to shoot you to kill you. So, knocking the gun off a Razorback, unlike for most armies, doesn't eliminate it as a threat. It can still bum rush you and set up assaults which will easily kill you.
Anyways, here's what has been working for me as far as troops:
- Take small troop squads so you don't waste points on them.
- Take a Night Scythe, probably the most useful thing out of the troop choices.
- Or, take larger bricks for a unit which is very hard to kill, will be extremely stand off-ish, and score multiple objectives. Seriously consider a Veiltek here so you can teleport out of trouble.
- The Ghost Ark doesn't do anything, at least on paper. I haven't tested it yet, but it looks pretty awful. It has crap for guns. It can regenerate troops that I likely won't shoot at. It's 13 armor but no threat at all.
One last thing on troops.... DUDE CAN I GET AN FAQ? I need to know if we can put members of both royal courts in the same squad. If we can, troop choices get a LOT better. I'm having to assume we can't at this time, and it sucks.
Now, on to very brief discussions about problems I have noticed building lists....
Imotekh and Reserve
As I mentioned in the previous article, I think Imotekh has potential to do a lot of damage. (He's rocking the house if you can use him in conjunction with a Chronometron.... but alas, WE NEED AN FAQ! Did I mention that already?) Imotekh also brings Phaeron to the table which is very handy with a Veil squad which play testing has shown me are very good.
Alas, he has a fatal flaw which I think most players will learn to exploit. The best way to handle Imotekh is to give the Necron player first turn and then go into reserve. Odds are in your favor that the Night Fighting will end before you come on the board, and if not, you'll only suffer one turn of it. This completely neuters Imotekh, and for that reason, I have decided that he is probably better off not in most lists.
The Dark Eldar Problem 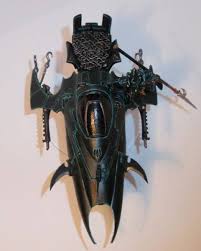 This army annoys me like Demons! They are stupid good versus certain kinds of lists but stupid bad against others and thus not altogether a good tournament army. Unfortunately, against Crons, they are stupid good.
The Dark Eldar problem is very simple. They have almost everything they need to completely cripple almost any Necron force. The only thing they don't have an immediate answer for is killing big blocks of Scarabs, but do they really care since they can just avoid them?
The mass of poison can easily wipe out squads to prevent Reanimation Protocols as well as kills Spyders and Wraiths. The Lance weapons giggle at Quantum Shielding. Their fast movement means they can easily stay out of your 24 inch kill zone with guns. Their ability to turbo right into your grill with Wyches means they can very easily setup assaults on you. The have night vision. Everything about Dark Eldar screws Necrons.
I'm having the hardest time trying to build a list that can even remotely compete here on paper.
The MSU Melta Problem
One big problem with Cron lists I'm trying to overcome is how do you stop a Space Wolf Razor Spam player from going, "You know what, screw this night fighting crap. I'm just going to bum rush you with my Razors, hop out when I get there, melta whip all your tanks, and assault what gets out?"
The Anni Barge Problem
Has anyone had any luck play testing these things yet? So far in my play testing, they have been very lack luster. :(
Scarab Farm

To combat a lot of problems, I've been looking at 2 lists to play test next. The Scarab Farm is one of those lists.
The Scarab Farm would seem to work best, on paper, in a more defense "hold mid" kind of fashion than a rush out and kill fashion. Back this up with Wraiths, some Veils, some Phaeron shooting blocks, and I think you got something that will work against most armies (not Deldar).
The reason is that the best defense against Scarabs is to bubble wrap and out-assault them. This won't work if you can leverage decent anti-infantry fire with Phaeron bricks against the bubble wrap and back the Scarabs up with Wraiths in assault.
You also take Imotekh here to provide you with 2 solid turns of Night Fighting plus the ability to seize. This allows you to wind up the Scarab Farm for a couple of turns as you advance.
HQ:
Necron Overlord + Phaeron + Warscythe - 120
Imotekh - 225
1 x Pulsetek - 55
2 x Veiltek - 120
Troops:
10 x Immortals w/ Gauss Blasters - 170
10 x Immortals w/ Gauss Blasters - 170
5 x Warriors - 65
Fast:
5 x Wraiths + 2 x Coils + 1 x Caster - 200
5 x Wraiths + 2 x Coils + 1 x Caster - 200
10 x Scarabs - 150
Heavy:
3 x Spyders + Gloom + Claw - 175
3 x Spyders + Gloom + Claw - 175
3 x Spyders + Gloom + Claw - 175
Night Scythe
Unfortunately, this may end up being the better Necron list as it may have fewer bad match-ups. (Deldar still annihilate this but at least it matches better versus Tyranids!)
I say it's unfortunate because all you are basically going to be doing is MSU 'Crons which is what most Marine armies already do very well!
This army does have CRAZY speed though, like Deldar. As such, it makes you have some serious advantages versus Demons and Nids which otherwise really wreck most Necron builds.
I'll expand on this more as I get a chance to play test and see how it works.
HQ:
Anrakyr - 165
Barge - 80
Necron Overlord + Scythe- 100
Barge - 80
2 x Pulseteks - 110
1 x Veiltek - 60
1 x Stormtek - 25
Troops:
5 x Warriors + Night Scythe - 165
5 x Warriors + Night Scythe - 165
5 x Warriors + Night Scythe - 165
5 x Warriors + Night Scythe - 165
Fast:
10 x Scarabs - 150
5 x Tomb Blades + Beamers - 150
5 x Tomb Blades + Beamers - 150
Heavy:
Anni Barge - 90
Anni Barge - 90
Anni Barge - 90
Posted by Neil Gilstrap at 6:11 AM