The RAW argument, tunnel vision, and willful acceptance of absurdity

I've been involved in a few rules discussions in the past week or so. Normally, I try to avoid these at all costs, but I don't know what struck me this week to get into it. Most likely, it was the post on BoLS about trying to claim that you do not move a vehicle by pivot, measure, move.
http://www.belloflostsouls.net/2012/02/bols-academy-9-vehicle-shenanigans.html
I then got involved in discussions on Dakka, oh boy, then I remembered why I don't engage in rules arguments where the first tenet of the argument is:
*** The only correct answer is the one that can be shown via RaW. ***

The rest of this article has nothing to do with the argument on BoLS. I think that Caldera is exactly in the spirit of trying to play the game correctly by noting that something doesn't "look right", seems to violate some books rules, and expressing a valid opinion.
Likewise, detractors express theirs as well.
This is more directed at the people in the argument who keep saying, "but RaW, the rulebook doesn't say... support... prove... etc."
The purpose of this article is to describe why taking the RaW approach to arguing rules for Warhammer is inherently flawed.... by RaW of course!
Proposition #1: Arguing that something isn't "RaW" as a dismissal is an argument using a vacuous truth, one which can never be proven contrary. Why? Because you have set the bar for required evidence of proof above and beyond the tool which you will use to measure it.
Watch this hilarious episode of the Boondocks.... http://www.tv.com/shows/the-boondocks/the-trial-of-r-kelly-500038/
You can fast forward near the end where Riley takes the stand. The prosecution plays the Video of R. Kelly doing a crime, and then Riley starts to state "that ain't R Kelly" even though R. Kelly gives up his social security number, has his grandmother on the video, and on and on as part of the gag.
What's going on here? The person whom the prosecution is trying to convince is setting the bar for required evidence above and beyond what is actually provable. Thus, he is create a vacuous truth, a truth who can never be disproven. 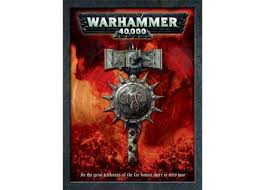 Asking this rule book to prove something beyond a SHADOW OF A DOUBT is flawed at its core. You are asking that the book explicitly state the exact words you need in order to believe something true. The absurdity here is of course this is known to be impossible.
However, we can just then try to rest and say, "well if it isn't written down explicitly, it can't be accepted as truth."
Proposition #2: RaW places an absurd value on the writing within the rulebook. What, why? After all, in the rules discussion, the rulebook defines our Universe, so nothing else should be acceptable in terms of understanding the rules?

Do you want the rulebook to look like that?
You do if you want to use the rulebook's RaW as the only way to determine the correct answer to a rules question.
Truth is, we all know the rulebook itself isn't very technically written. Placing the value of a rules argument solely on if something does or does not exist in the RaW is fundamentally flawed because the book itself is not written to withstand such scrutiny.
This is why we have a Supreme Court in the US, to interpret what is fundamentally flawed, the Law. Written as best as it can be, relying on it as "RaW" sometimes makes you right and sometimes makes you wrong.
The bottom line is, it's not the only path and relying on the written word alone is absurd.
Proposition #3: Demanding an RaW explanation is often an unwillingness to except proof by implication and proof by contradiction, usually because the rules lawyer in question doesn't understand them.

I'm not going to get all philosophical on you, but here's the quick definitions.
Proof By Implication: This is when something doesn't need to be explicitly stated but is rather implied by the existence of other evidence. (If you are into astronomy, this is basically the theory behind Dark Matter. You can't see it (RaW), but you know it's there based on the evidence provided by things around it. (Proof by Implication).
Point: I don't need the Rulebook to explicitly tell me that units move in a path, the existence of difficult terrain rules implies it. (this is in regards to arguments on BoLS)
Proof By Contradiction: I can show that you are not correct by coming up with a scenario which invalidates the assertion. With a Proof By Contradiction, I don't need to give you the right answer, I just need to show you that the answer you have given is wrong. The rulebook does not need to prove an assertion if I can disprove it using other rules.
*** The Bottom Line ***
The temple of "RaW" really needs to topple. It gets old.
You realize that by "RaW", the game of 40K is mostly unplayable. Why? Exactly because of Proposition #1 and Proposition #2. By "RaW", we are placing an unreasonable burden on a flawed document.
And no, I'm not arguing that everything should be ruled RaI.
What I'm stating is that using common sense, reasoning, and simple proof tools, are all acceptable ways to resolve a rules discussion. RaW is not the only way, and in fact, is probably the worst way to approach the discussion.
Posted by Neil Gilstrap at 6:54 AM