Thoughts about Grey Knights and Tournaments 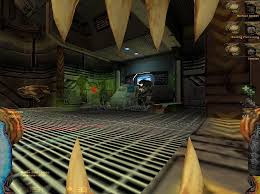 I used to play a game about a decade ago called Natural Selection. That game was totally awesome! They are supposed to be working on a sequel but have been doing so forever.
Anyways, Natural Selection was popular enough at one point where groups began to spontaneously involve themselves in league play. The developers encourage this level of play.
Long story short, there become a clear division on the development forums between what was called "Pub play" and "Clan play". The differences are really simple.
- Pub players were just the average public playing the game. They logged into random servers for a game and played to their heart's content. (I was a pub player by the way).
- Clan players were guys who organized themselves into clans and participated in league play, matches, etc. These were the guys who would have schedule practice times, matches, and so on. 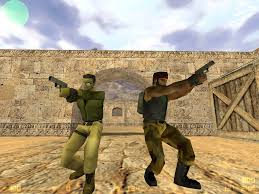 Now, most of you would probably relate to this story better if I mentioned Counter Strike which also had the concepts of "Pub play" and "Clan play". I would have just said Counter Strike, but Natural Selection was SOOOOOOOO much better!
Anyways, I digress.
The point is, there were two distinct groups of players.... those who played in unorganized, unpracticed games, and those who trained to compete.
Now, at face value, there isn't an issue here. However, an interesting phenomenon showed up after a while.
You see, when the devs were making adjustments to the game, the Pub Players and the Clan Players wanted different things, sometimes entirely opposite of each other.
One example I explicitly remember were that Clan Players felt Fades were terribly over-powered in clan matches and wanted their skills trees reworked and blink effects altered.
Meanwhile, Pub Players felt that Fades become almost completely useless when they lost their rocket attacks.
What gives? Well, practiced Clan Players could wreck your face with a blinking, assaulting Fade which were over-powered but required a ton of skill to really leverage. Pub Players (including myself) didn't have that kind of skill and wanted our easy to use rocket attack back.
I really believe Natural Selection's downfall eventually came from this type of discussion because the Devs almost continuously catered to the clan players. 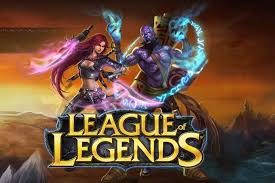 Anyone out there play League of Legends? Of course you do! Next time you want to see a good analogy to what I'm talking about, read the dev boards. You'll notice that top "clan" players have entirely different opinions on what in the game is OP, UP, needs fixing, addressed etc. 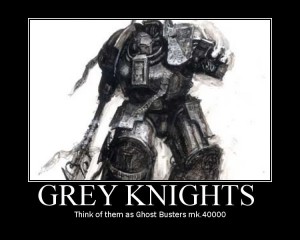 Hai Grey Knights!
There is just a ton of vitriol surrounding the Grey Knights dex. Moreso than there was against the Space Wolves and Imperial Guard last year? Hard to say, but I think so!
I think so many think that the Grey Knight codex is so horribly broken that it's been terrible for the game of 40K.
Yet, others, including myself, think there are plenty of ways to overcome it. Powerful, YES. Broken, NO.
However, who do you think is in the majority opinion here?
If I were to examine the Codex from the eyes of person who is not an avid competitive player, would my opinion change?
I think it would. I think, if I looked at it from the perspective of someone who doesn't play overly competitively, who doesn't study the game, who doesn't spend hours and hours reading about, blogging about, podcasting about, 40K, I might think Grey Knights are a little broken when compared to books like Tyranids, Dark Eldar, Space Marines, Eldar, and so on.
What does everyone else think here?
And of course, the next logical question then is, if we think we would think it over powered if we were a "pub player" rather than a "clan player", would we do something about it?
Posted by Neil Gilstrap at 12:10 PM