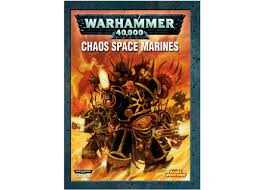 Before I even begin, I am having as much trepidation about all the horrible 6th ed. rumors floating about, and would like to add a preface to this entire article series that in 2 months, none of this may even apply.

We don't even know if Kill Points will be a part of 6th ed.!

In other news, once again, the purpose of these review articles is just to examine what is available in the book with an eye towards potential use in a KP Denial build.  Keeping in mind that we are generally looking for high positive kill point potential, durable units, and a speed element.


Your capacity to build a CSM KP Denial list is about the same as Space Marines.  You have some very worthwhile and interesting options, and you will see a lot of overlap in concept here.  For that reason, this makes for a good pick for today's article because it will reinforce thoughts from the Space Marines article.


Just in general, CSM HQ choices don't really add much to the army except for a beat-face commander.  This is true of everything except Lash, of course.  Lash is still a good buy!  It's a great buy for KP Denial because you can use it to get KPs off of infantry but also to keep assaults away from you.

Sorceror - Because of Lash, this is probably the most efficient KP denial pick, just at a cursory glance.  Take lash, put him in a squad.  Good to go.

Named Characters - Again, for KP denial, none of the named characters really add much.  For this reason, you are pretty good to take whatever.  Personal favs are Kharn and Abbadon.

Demons Princes - Demon Princes are the big NO-NO in this case.  Why?  Because they can be easily targeted and killed by enemy shooting.  Best left at home.

Fabius Bile - Mr. Bile deserves some special attention in this case.  The reason is that he can turn plain old CSM into Fearless units.  Fearless is always good, especially for an army that can be swept and can't regroup if below 1/2 strength.


Chosen - Chosen are a tempting choice from the Elite selection because of their ability to outflank.  Rather than picking up speed units, units which can outflank are sometimes just as useful for late game contesting.  The only down side here is that you generally want to outflank them in a Rhino which will give up an easy KP.  However, with Chosen ability to pack so many assault weapons, marks, and combat potential, they have a good positive kill point potential.  Overall, it's not a bad thought, but not a great one either.

Terminators -  Just like with Marines, Terminators are durable.  Further, Chaos Terminators can pack 2 x Reaper Autocannons in a 10 man squad for 350 points.  You could also afford a Mark at that point to up them to a 4+ invuln which is nice.  Overall, though, it's still a normal Terminator.  These guys can get much better thought at a back-field KP denial roll if you team them up with a beater in the HQ slot, like Abby. 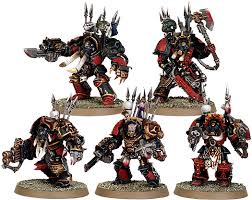 
The CSM book has a very interesting tidbit in here in the Troop selection that you won't find anywhere else. 20 Man Fearless Units.  It's like taking a Horde of Boyz but with a 3+ save and fearless.  All of your choices here are fearless, even the normal CSM if you take Fabius Bile as your HQ.  20 Man Squads aren't a requirement, but they do have a lot of positive kill point potential.  Chaos Troop choices are also pretty good at CC which is a good bonus, and just like with Terminators above, if you put a beater in the back-line, that's a serious deterrent to the enemy wanting to close in on you.

Chaos Space Marines - If made fearless by Bile, now you can pack a heavy weapon in up to a 20 man squad.  Gives this unit great positive kill point potential, Strength 5, and a lot of attacks.  Not great but worth considering.


Berserkers/Plague Marines - Fearless, decent CC, potential for huge squads.  The only problem here is lack of something long range to reach out and touch the opponent, but they could still have a role in objective holding or just being annoying.  Plague marines can carry some Plasma guns for a potential shot or 2 at light armor.  Plague Marines are also tough as nails.

Thousand Sons/Noise Marines - Both of these units, in bunches, can bring some pretty good anti-infantry fire to take out those small MSU squads that are so common.  They can also both have a long range weapon for potential light armor shots.

The bottom line for CSM, though, is cost of the units.  Everything is going to burn up points! 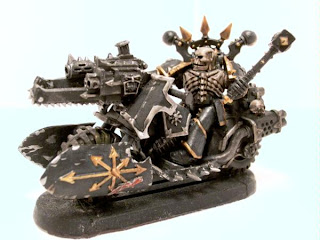 
Bikers - Just like with Space Marines, you have access to Bikers, some that can even be T6.  The downside is lack of an attack bike.  So, you might be able to use this as a speed unit, but it's kill point potential is going to be low because it lacks any ranged punch.

Obliterators - Not as durable as one would like for KP Denial but do add a lot of flexibility with long range potential and deep striking potential.  They may end up giving up a KP, but any experienced CSM player will tell you that Oblits can usually earn their KPs before they go down.


As we already know, the CSM book lacks a lot of useful tools for a KP Denail list.  However, it does introduce a great concept of taking HUGE squads and swarming the board.  There may be some potential here to Horde the board like Orks can do and control objectives simply by covering them up in bodies, letting the units with high KP potential pick up the slack for you.

Bottom line, though is, I'm not sure you could really effectively point it out.  Overall, I think there may be some merit here but probably not ideal.  I wouldn't know either without play testing. 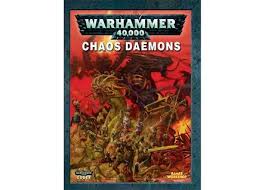 Demons have a few things going for them in the KP denial department, easy access to fast units, easy access to BIG units, and ability to control the board with some lethal close combat abilities.  Combining these concepts, I think you can do well with Demons in a KP denial scenario.


Fateweaver - Probably what everyone will jump to!  Fatey can be a good buy, but he can also be a bad one.  The problem with Fatey is that he will be your opponent's target #1, and he will give up a KP.  The upside is, of course, while he's there, he makes you tough.  In my opinion, I think he's a crutch.  You can probably do without.

Heralds w/o Chariots - Because Heralds can be ICs, they can hide in squads.  Because Demons can make some very durable squads, this makes these guys as a HQ choice, durable.  Specifically, I like Tzeentch Heralds as a KP denial idea because they can add BS 4 Bolts to a Rhino killing party.  They can also bring some anti-infantry fire as well.


Fiends - Fiends have some potential here simply because they can be a fast element.  Charging a unit on an objective late game contests it.  Being a demon, you are fearless and will live for a round against most opponents.  Downside to fiends, though, is they also give up KPs.

Crushers - Just a brick of a unit.  Can absorb a ton of shooting.  Because of that, these guys can also sit near mid-field and present an enormous CC threat.  Basically, they create a Threat bubble that is hard to remove.  Because of that, this gives relative safety to shooty units which CAN pick up KPs, like Horrors.


Horrors - I think that Horrors are the way to go, just in general.  The reasons are many.  First, they can be in a squad of 20.  That 20 man squad can put out enough fire power to kill a 5 man infantry squad.  Second, bolts are obvious.  Third, because you can hide Heralds of Tzeentch in these squads to add more bolts.  What you end up with is a brick of a unit that has a great positive KP potential.

The downside to Horrors is they can be assaulted and tied up.  Not a problem for Demons!  That's why you include a brick of Crushers or Letters who will baby sit these units.

Letters - Same as Crushers above.  Take a brick and create a big threat.  Keeps the enemy away from Horrors.


Khorne Dogs - Fast unit, just like fiends, but in a bigger squad.  Not a bad choice.

Screamers - Probably my favorite pick.  The squads aren't as big, but they have a 4++ can can turbo-boost 24 inches.  This makes for a great contesting unit.  Being fearless with a 3++ (after a boost) basically means you can't dislodge them late game, even with assault (because of 4++).  Great choice here for a speed unit.  Not to mention, they carry melta bombs and so themselves can pick up a lot of KPs in a multi-assault or against Dreadnoughts.


Nothing to see here!  No, a Nurgle Demon Prince is not durable. :P


I'll pony up a list on this one because I think, unlike with CSM, there is a potential here for a pretty good army to examine. 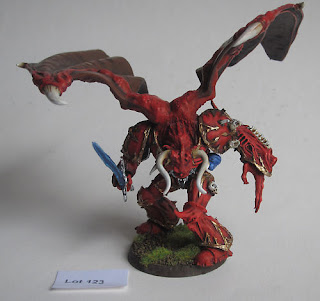 The bottom line is, you are going to drop mid-field.  You are going to put your Heralds in with a Horror squad and start plinking away at Transport with Herald bolts while swamping infantry with the rest.  (Split fire from Legion and Sorcery).  When that unit gets low, move the Heralds to the next squad.

Your letters and Crushers are simply there to keep the enemy away.  Most armies can't advance into a combat potential that rough.  (Think about it, your opponent will want to advance on YOU.)

Screamers are there to hang out till late game and fly out to contest.


Some armies will have enough bullets and bodies to overwhelm you.

Posted by Neil Gilstrap at 8:16 AM