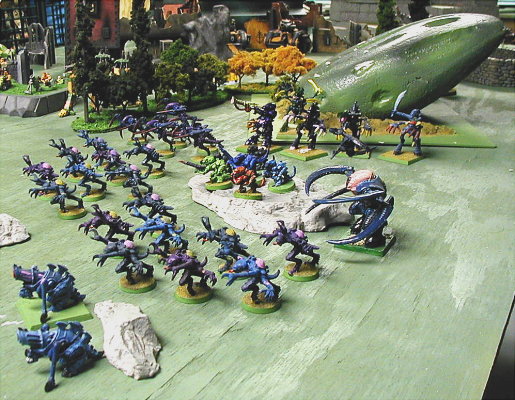 I wanted to muse a little bit about varying points levels. Most people that I have met do not have much of a preference to a given points level. Some people are quite vocal about their preference for points! For this article, I would like to take the opportunity to discuss varying point games and some potential effects on game play they might have. I will be breaking down the conversation along the following sub-sections.

Each one of these varying point levels has an impact on the way the game is played, especially games at the 1500 and 2000+ point levels. Each codex also has a seeming sweet spot for points which could be a hotly debated topic in its own right. I’m going to hit the Pros and Cons of varying point levels. In truth, I think everyone should try all the different levels. MY personal preference is usually, the bigger the game, the more fun it is to play!

For each point level, I want to point out some common misconceptions and address them.

1500 points is a superior level because it forces players to make choices because they can’t include everything they want.

- This is the most common misconception from people who generally prefer 1500 point games. For those of us who player at higher points, there are plenty of sacrifices and choices you have to make even at 2000 points. You can’t always have what you want. In fact, for many armies, 1500 points is so restrictive they can’t get what they NEED let alone WANT. The theory behind this is nice, but this is also what introduces the exacerbation of codex imbalance. For example, how many Long Fangs will a Space Wolf player have at 1500 points? 15. How many will he have at 2000 points? 15. You can see how the effectiveness of such a powerful, widely under-costed unit gets diminished at higher points and not at lower points.

- This is true! However, it is also true that there are builds that work at 1500 that don’t work at anything more. So, this statement is not a valid reason not to play at 1500.

1500 is balanced and the point level intended for play by GW.

- Most games at ‘Ard Boyz finish in the 2 ½ hour time limit at 2500 points. At the NOVA, all of my games were done before 2 hours at 2000 points. It’s not the point level that matters, it’s the players. The number one factor in making a slow game is looking up rules while the game is going on or by people that don’t have charts memorized or their basic army stats.