Building an Argument for Balance Part 1: Can we agree on what balance means? 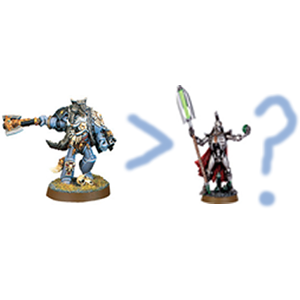 Before searching for a more quantifiable way to describe army balance, we have to first agree on what balance means. I already introduced the idea that “can” does not equal “okay” in the pre-statement. Let me flesh that out a little bit more.

One of the ways in which the competitive-scene nowadays justifies most armies being balanced is what I now refer to as the “mono-build” defense. Consistently, you will see the argument that is along the lines of, “well, Dark Eldar, overall, aren’t that good, but there is still a mono-build or perhaps two builds which are still competitive!” Replace Dark Eldar with a multitude of other armies, and you will see where I am going with this. The notion being put forth here follows two thoughts:

1) If an army CAN win a game, it must be balanced.

2) Even if the majority of an army doesn’t work, most of its units being worthless or over-costed, and if you hold your tongue JUST RIGHT, the list is balanced okay with other dexes.

As you see, with just the slightest amount of “spin”, both of these thoughts are not only ineffective at showing that a list is balanced; they are almost proof that there isn’t balance. If an army is LIKELY to win games versus CAN win games, there is an obvious imbalance. Space Wolves are LIKELY to win some of their games. Black Templar CAN win some of their games, if you hold your tongue right. Dark Eldar are OKAY provided you run a certain list. Imperial Guard has list variants running in droves, all of which creates uncertainty in play style and list composition, all advantages. These is no balance in stating that an army is competitive only every third Tuesday when the stars align. I hope that without further discussion, we can agree that THIS IS NOT BALANCE.

I think that what the competitive scene really wants to say is, certain armies, although not very balanced in the grand scheme, CAN still win at a tournament in the right hands, thusly making them balanced ENOUGH for competitive play. This statement is a lot better than trying to come up with some lame reasons why something works. We aren’t saying that the ‘dex is balanced. We are simply saying that they CAN still compete in some form or fashion. I like this notion much better because it contains honesty.

I’m not saying you can’t win the Heavy-Weight title in your 50’s. George Foreman did it. What I’m saying is that this doesn’t preclude an imbalance in fighters between someone in their 20’s and someone in their 50’s.

So, the point I want to drive home here is that just because something CAN be competitive does not mean it is balanced. In mixed martial arts, the Gracie family showed us that a man weighing 175 pounds can decimate a man weighing 275 pounds in a fight. That being so, we do eventually come to the realization that we get a lot more INTERESTING and FAIR contests when we put people in weight classes. See, truth be told, the goal of any competition should be to provide an arena that is as FAIR as possible to all contestants who are thusly competing on equal ground to determine a winner. This should be the dream of all competitive players! We want an arena where we can fairly determine who the best is, thusly enticing us to all get better.

As such, I would like to introduce the notion of FAIRNESS into the definition of balance, for perhaps the first time in competitive 40K culture. FAIRNESS combined with the CAN idea gets us on the road towards what balance really means.

Definition of Balance – Two armies are balanced when either army CAN defeat the other army and both armies are FAIRLY matched up.

You see, right away, the ability for an Imperial Guard player to mix and match more flavors into his list building than Baskin Robbins ice cream cones automatically places his potential Dark Angel opponents in an UNFAIR scenario. This truly violates the definition of balance, but in order to see that violation, you have to agree to several other ideas.

1) Proposition – Part of army balance is the ability for the army to create and/or construct a variety of viable lists.

2) Proposition – There must be a way to determine if a list is VIABLE or not.

3) Proposition – Viability is determined based on the overall level of FAIRNESS in potential match-ups.

Let’s talk about these ideas for just a moment, especially the third proposition. We are all familiar with the term “all comers list” as a list building technique which incorporates the idea of building an army list which is capable of fighting with and defeating any other possible list in the game. So, your ability to construct an “all comers” list will vary greatly depending on who your potential opponents are. For example, if you go to a tournament and know that you could only possibly face Necrons, Dark Angels, Witch Hunters, and Chaos Space Marines, your ability to construct an “all comers” tournament army with ANY list drastically increases rather than if you had to build a list knowing that you could potentially face every codex. The problem is, as is already generally accepted fact in the competitive community, that certain lists can only possibly compete with ALL other codices in very specific ways; i.e. mono-build theory. This IS generally accepted in most competitive circles, and if this is true, then proposition #2 must also be accepted otherwise this decision could never be made.

So, lastly, let’s analyze Proposition #1. Instead of asking you if Black Templar really can defeat Space Wolves thusly making it balanced, let me ask you something a little different instead. Is it FAIR that Black Templar are stuck with a couple of “mono-builds” and Space Wolves are not in a contest between the two? The answer is obviously no. It’s not fair. So, if something isn’t FAIR, why is it considered competitive? Or Balanced? It shouldn’t be! Fairness IS part of balance when it comes to competing.

This is why we don’t put Heavy Weight fighters in the ring with Middle Weight fighters. It’s not that the Middle Weight guy “can’t” win. It’s that we are introducing a scenario where there is inherent UNFAIRNESS. This doesn’t create a balanced competition just because the guy CAN win. It’s inherently unbalanced because it’s unfair. Simple.

Let’s get out of the arena of mono-building and variety. Let’s go an entirely different direction! Here some rapid fire questions for you.

· Is it FAIR that Black Templar have to pay more points for the same Razorback that Vanilla Marines get?

· Is it FAIR that Orks have no melta weapons?

· Is it FAIR that Necrons have to phase out because of We’ll Be Back even though Blood Angels can convey a FnP aura over almost their entire army and don’t suffer from this?

The answers to each of these questions are complicated! The point I’m trying to make here is that there is a lot of potential UNFAIRNESS throughout the whole game system. However, that’s inherent because we have different armies. We don’t want to make every army the same. That would be boring! What we really NEED is a way to judge FAIRNESS because fairness really is part of balance. We can’t do it with specific scenarios, we have to analyze the situation overall. In other words:

It’s definitely NOT FAIR that Space Marine devastators are flat out more expensive than Blood Angel devastators, but it MIGHT BE FAIR since Space Marines have access to some special characters that Blood Angels don’t. Thus, we introduce the idea that the overall “scheme” might create some fairness.

Likewise, we introduce the idea that the overall “scheme” might create some unfairness.

Let’s modify our definition a bit!

Definition of Balance - – Two armies are balanced when either army CAN defeat the other army and both armies are FAIRLY matched up in their overall ability to compete with their codex.

It’s going to be an uphill battle trying to figure out a way to decide on if two codices are overall FAIR and thusly, balanced! However, just because something is hard doesn’t mean we shouldn’t at least try!

Let’s add a few more things to our definition that should be taken for granted. First, FAIRNESS also encompasses ability to compete with each other across the scenarios in place. It also assumes that the players playing each army are of equal skill levels. It assumes a lot more than just that, as well!

There’s probably more that needs to be added to this definition as we move forward! We’ll discover it, I’m sure, as we embark on this journey.

Posted by Neil Gilstrap at 7:50 AM