Building an Argument for Balance (Pre-Statement) 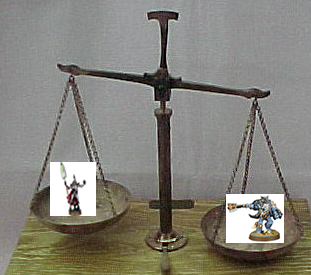 When you take a course in ethics, usually required nowadays by some bureaucrat to get any kind of college degree, especially ethics as applied to technology, the “office printer” scenario always pops up. Is it ethical to use the office printer to print materials which are for personal use? The answer is easily understood to be, “no”. Yet, EVERYONE does it. Indeed, if everyone participates in such a dastardly, unethical practice, is it really unethical? A purist would argue that the answer is yes! A realist or naturalist would argue that, although unethical, reality dictates it as acceptable. Since ethics is a subjective matter, how could it really be unethical if everyone takes part in it -- thusly forming the majority opinion? Ethics aside, it is the scenario of “everyone knows it” but “no one admits it” that I really want to get to the bottom of. The reason is because that is exactly what I believe about the current state of codex imbalance in 40K.

Now, as any person who might fancy themselves a competitive player in the 40K arena knows, discussing any notion of balance, tactics, or appropriate army usage is generally lost in a public forum. That’s because the vast majority of the public doesn’t understand enough about the game or is stifled by their local meta in such a way as to skew their opinion into the realm of “doubt” rather than general acceptance of well-laid ideas. For example, although a competitive-minded individual doesn’t need to be told that Necrons are a terrible army, there are still many out there that would argue that it is still quite potent and effective. As will be shown, this very idea itself makes honestly discussing balance amongst codices extremely difficult since it’s hard to find common ground. For example, if the best tactician in your gaming group happens to play Necrons, you might believe that Necrons are a powerful force. If the best tactician plays Imperial Guard, your Necron players will wonder why they ever wasted money on their models, even if they are the second best players in your group.

However, a student of the competitive scene of 40K has no reason to have their ability to consider the state of codex balance be skewed in this way. Yet, the entire premise of this series of articles is going to be about building an argument to show that the codices are in fact not balanced. So, what gives? If the competitive scene seems to think that the majority of codices are balanced enough for general competition and I fancy myself part of that scene, why would I be writing an article about how they aren’t balanced – a paradox?

The answer is that I believe the competitive scene knows that there are imbalances but are unwilling to admit it. I think there are several possible reasons for this, but first, I want to talk about why I think we know this to be true.

• Ask a competitive-scene player how they would “rank” the armies in 40K. Notice how, consistently, certain armies will always fall to the bottom. Black Templar, Dark Angels, Necrons, and Demon Hunters are usually the worst. Usually following that will be Dark Eldar (pre-new Codex), Witch Hunters, Tau, and so on.

• Look at tournament results. How many Black Templar players have golden tickets this year? How many Space Wolf players have them?

• Analyze the armies that “known” competitive-scene players take to tournaments. Do you see any of them running Witch Hunters? Dark Eldar? Black Templar? Chaos Space Marines?

• If someone was new to the game, would you recommend that he/she pick up Dark Angels as their first army? How about Dark Eldar? How about Blood Angels?

I don’t need to answer these questions because we all already know the answer. Indeed, just like the “office printer” scenario, we will all scream that this game is basically “balanced” yet can plainly see that the answers to these very basic questions will certainly show that it is not. This is paradox! We all know it, but we won’t admit it.

I have several theories about this:

• Theory #1: Competitive-scene players know that admitting to an imbalance opens the door for much greater evils! Evils like COMP…. *shudder* Evils like DRIVING AWAY PLAYERS from their tournaments because their armies truly can’t compete. This theory is that competitive-scene players FEAR admitting there is imbalance because it might create a problem with building up the competitive scene. I’ll address this later.

• Theory #2: We “want” there to be balance. We want it so bad that we’ll lie to ourselves to make it so.

• Theory #3: We have a hard time separating ourselves from CAN versus PROBABLE. Example, a plane can crash and kill all the passengers. It’s still more PROBABLE that you will die in a car wreck rather than a plane crash. So, although Black Templar CAN win games against Imperial Guard, the PROBABLE outcome is that they won’t. More on this later, but we also have to assume that the two individuals are of equal skill.

• Theory #4: Competitive scene players, by nature, are arrogant individuals. It’s part of being competitive to believe that you are the best or that you have a chance. When presented with the idea of beating everyone else with Chaos Space Marines, they’ll rise to the challenge. (As an aside to this, when the rubber really meets the road, go back and look at bullet #4 and rebuke this one yourself!)

So, what’s my goal here? I have several.

• Like most other competitive players, I want to grow the community and the scene. First and foremost! I don’t believe we can truly do this if we mislead people about the current state of the hobby. This hobby is very, very expensive! Convincing people that Black Templar can be competitive with a “mono-build” is not the way to get new, competitive players.

• My goal is to create a base-line for what balance is or really means.

• My goal is to attempt to come up with a logical, reasonable way to show where balance exists and doesn’t exist. The reason for this is two-fold. First, I want to gather the evidence necessary to work for goal #1. Second, so we can start being honest with ourselves.

• My fourth goal is to show that “can” does not equate to “okay”. Just because something “can” doesn’t equate to it being functional. This will be extremely helpful to the majority of the player base out there that doesn’t like the whole competitive scene.

• Fifth, I want some reasonable solutions to the imbalance problem rather than the ostrich algorithm…. Burying our heads in the sand and pretending like this game is balanced so we don’t have to deal with it, usually in ways that scald competitive players like holy water to a vampire…. Namely a variation of comp or what I like to call league brackets. Just to plant a seed, the reason why we don’t put Heavy-Weight fighters in the ring with Middle-Weights.

• Lastly, I want more people to be able to play with and enjoy their armies in a truly competitive environment, one which is actually balanced, not “pretend” balanced.
Posted by Neil Gilstrap at 6:43 AM