I was doing some thinking about my SW list, and I started to question, when is it better to use Frag Missiles or Krak Missles to kill stock marines? I was somewhat surprised by the analysis, and figured I would share.

Krak is easy to calculate! However, before we can truly analyze Frag's potential, we must first deal with the "deviation" issue. The "deviation" issue is that a Frag missile doesn't have to exactly "hit", to hit. For example, a hit = a deviation of 4 inches or less = a deviation of 5 inches or less (because a centered template won't move off a model with a 1 inch deviation), etc.

So, to begin dealing with this, let's analyze just the flat out odds of a single Frag hit killing a stock marine.

So, right at face value, to kill a single Marine, Krak is better than Frag, and we are assuming that the Frag auto hits! It's better even if the Marine is in cover.

Yet, we know that Frag doesn't hit just one marine (in theory anyways). That's the point! It hits multiple targets. So, the fundamental question is, when is it better to use Frag instead of Krak?

Well! All of this great. The problem is, Frag doesn't auto-hit, does it? Indeed, it does not. That little blast template deviates. In fact, it deviates 44% of the time! 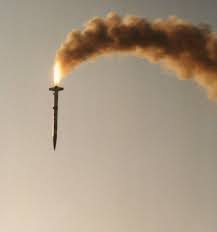 So, 44% of the time, the blast marker will go exactly where we put it. This is something we can work with! Okay, let's do some more Mathhammer! Now, let's assume our Blast Template HAS TO HIT for this to work. How many Marines would HAVE TO BE HIT in order for the Frag to be better than the Krak?

Not very good at all! So, let's put our handy "at least 1" calculator to work and ask the question: "when will Frag hits EQUAL a Marine in Cover and not in Cover?"

We have to Tag 4 Marines with an exact hit to equal 1 Krak Missile firing into a Marine in cover. For a marine not in cover, we need 11 WHOPPING HITS to equal one Krak Missile. Yikes!

One more thing to consider before we come to our final conclusion. Just because a Frag missile doesn't exactly hit where we want to doesn't mean that it misses!

One could make the argument that slight deviation isn't a big deal. However, now, we are entering into the realm of situational arguments! The next question is, well, how much deviation is acceptable? That's going to depend on how clumped up the target is! Now, I knew you would ask me these questions! So, I'm solving it for you!

Here's your answer to the age old question in RAW form:

How many Marines do I have to be able to HIT with Frag before it is better to use than Krak????

Q) Well, how do I know how much deviation is acceptable?
A) The answer to this is easy! The acceptable deviation = the amount of marines you NEED TO HIT to be better than Krak. So, if Marines are sitting in cover, and you can still hit 3 Marines OR MORE, even if the template deviates 2 inches from where you place it, Frag is better! If not, Krak is better. You see?

Q) So, basically what you are saying is that the likelihood of Frag ever being better than Krak against a Vanilla Marine who is not in cover is slim to none?
A) Yes, that's exactly what I'm saying. If you can't see that here, look again. :) There is a slim possibility that you could tag enough Marines, but they would have to be seriously clumped up, like just having deep struck or something. Remember to pay attention to your deviations before you go "NUH UHZ IT HAPPENZ ALL DUH TIMEZ!"

You need to be able to hit 4 Marines with a direct hit to really make it statistically better than firing a single Krak Missile into cover. It's basically never more efficient to use Frag over Krak if the Marines are not in cover.

Past that, things get more complicated. You have to start "eyeballing" allowed deviation amounts and odds of hitting a certain amount. Refer to the chart to see! Basically though, if you lay that small blast marker down and it touches 4 or more marines, you are better off using Frag (unless they aren't in cover!)