So how do we kill Wave Serpents? Hey all, Kevin here to talk about the new menace of the tabletop. Something so cheese-tastic even Heldrake cares. I am talking, of course, about the Wave Serpent. The standard Wave Serpent load out is coming out to be upgraded with Scatter lasers, holofields, a shuriken cannon and the 5 man Dire Avenger upgrade. Thats an Average of about 11.5 S6-7 shots that are more than likely all twin linked and, either ignore cover/cause pinning, or could be auto wounding with AP2 from an AV 12 fast skimmer with 3 hull points, a Serpent shield, and a 4+ cover save most of the time. So basically its a fast vehicle that will either be shooting you from the edge of its range, or scurrying away out of range of any threats just to scurry over to an objective late game.

Now a smart Eldar player will check ranges to anything on the table and if he/she feels that enough threats are in range that can kill it he will just back away skirting the table edge or will stay put and not shoot off the shield relying on it, and the holo fields, to keep the serpent alive. This does, frankly, work pretty well as long as the Eldar player keeps hull points intact through out the game by staying out of range. So his army will realistically only stay intact as long as he keeps scooting away waiting to use the shield defensively until you need to grab an objective late. With the shield still intact, using my crude version of math-hammer...sorry Simhammer DJ haha, from an MEQ it would take 18 missile launcher shots to reliably down a Serpent with it's shields up (Saying you had 18 shots, 12 hits, 6 pen, and three HP's reduced from 3 holofield blocks) So realistically even with three full missile squads it is not good odds. So to have shooting be viable we need to basically ignore cover and/or re-rolling hits or penetrating rolls. With Re-rolling hits the number of missiles needed drops down to just about 13.3 shots. A significant improvement yet still lacking as it is still an unrealistic amount of missile launcher shots to do enough damage to take out 6+ Wave Serpent. Although ignoring cover would be better as only 9 shots would be needed to take down a wave serpent this still would be too many.

So basically the common shooting ability of a normal MEQ army is just plain insufficient to deal with a Wave Serpent spam army. Remember those totals are of course relying on average rolling and the fact that you are even in range as most wave serpents will just run away at the first sign of threatening Anti-tank fire. Although it is also on relying on the serpent shield downgrading all damage results to shaken results, which is only likely not a given. Although we have to remember a Serpent shield only works defensively in the front and side armor and can only shoot in the forward arc. Also a Wave serpent needs to actually move to get its cover save.

Still this points to an obvious fact that normal shooting armies cannot reliably deal with Wave Serpent spamming in an efficient manner. So this has pointed to a lot of blog writers out assault as the one viable way of dealing with Wave Serpents is assault and when you think about it they do. In assault your only dealing with AV 10 rear armor and are ignoring the serpent shield since it doesn't work on the rear armor and you cannot get cover saves in assault. So this means if they are threatened with being assaulted Wave serpents usually will need to run away and more than likely turbo boost in order to avoid being destroyed. This means it will not be shooting. 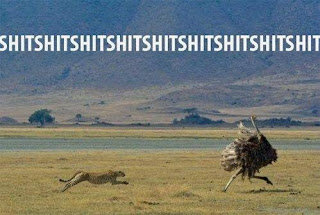 So there are a few builds, although some ridiculously uncommon, that can deal with Wave serpents. This does include  Ravenwing bikers as they would have the speed to threaten Wave serpents in assault with power fists and grenades as well as pack a few melta weapons/divination access which will help lower the amount of results reliably needed to take down a Serpent. Although getting into threat range needs to happen quickly as Serpent shields do make a mockery of Dark shrouds and the high strength shot spam can easily thin a bike horde.

Now any list that could keep Wave serpents moving away and not firing off their shields or with the potential of actually getting into assault would work decently against Wave Serpents. Especially if it could be coupled with saturation of anti-AV 12 shooting. Yet we do have Vanilla Marines and potential Meta shifts coming our way soon to help bring out weaknesses in Wave Serpent builds. So is the answer easy right now, or even common? Not really....only game play will tell.

So what do you find works well against Wave Serpents? With all the different game factors at play there are at least a few tactics that could benefit the whole. Put them down in the comments and lets try and get a conversation going. In the mean time I am gonna keep building and painting more Wave Serpents ;)
Posted by Kevinmcd28 at 5:51 PM