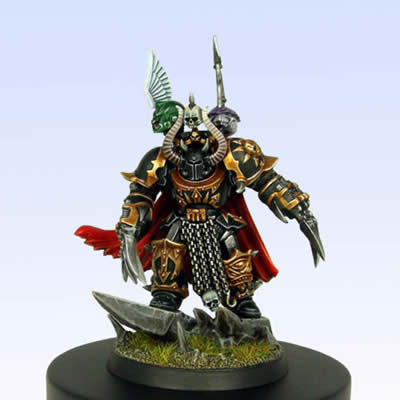 Advancing up the Board

Last time, I discussed how one goes about deploying a rhino rush so that it does its best to not get blown off the table should the opponent have first turn. Before that, I also discussed the types of units and choices that can go into the alternate Chaos list. This article is going to further expand on the idea, providing some elements of key tactics that must be mastered in order for this list to be successful. The first key tactic is Advancing on the enemy. The second is Board Control.

A rhino rush is effective once you close the gap with the enemy. Ideally, if you get first turn, you’ll have closed the distance with only having to suffer one round of enemy shooting. If you have to go second, you will most likely need to weather two rounds of shooting. Either way, you need to master the methods of advancing across the board without getting shot to pieces.

Before I start discussing critical tactics for advancing, let’s first discuss just what an advance attempts to accomplish and how. The idea with this kind of Rhino rush list is to get your guns within range of the enemy where they are most effective, usually within 12 inches. Believe it or not, one full movement off your deployment line (or close to it) is usually enough to get right in that sweet spot. Why?

In Spearhead, that no man’s land is basically 24 inches as well, but it could be slightly shorter or longer if your opponent deploys in the corner. For Dawn of War, the “no man’s land” is very large, up to 48 inches (the entire board) because you have to roll on the board edge. This is actually mitigated though because the first round is night fight and will likely result in you getting the first 12 inches relatively safely. Thus, this becomes a lot more like Pitched Battle.

Now, the enemy can always choose to deploy “toes on the table edge”, or basically trying to push his entire army as close to his table edge as it can get. This may create more space between you and the enemy, and this type of tactic, depending on the army they are running and their overall army footprint, may thusly require the second turn of movement to close the distance.

Otherwise, back to the point I was making about it really only taking one turn. Here’s why! Assuming a pitched battle scenario, you will drive forward off the deployment line (or close to it), 12 inches. You have covered 12 of the 24 inches of “no man’s land”. From there, if you assume that your ride is destroyed, your troopers will simply move forward 6 inches next turn, and with their 12 inch range, still be able to overlap well into the enemy’s deployment zone. PEW PEW!

The same basically holds true for Spearhead. Although, of course, it’s best if you get 2 turns of movement where possible. This is also true of Dawn of War.

All of that being said, you don’t need to necessarily get the full distance in a Rhino. Indeed, this list wouldn’t work at all if that were the case because the enemy will definitely be wanting to kill your Rhinos to stop your advance. This will especially be true where it might even take a dreaded 3 Turns of movement to close the gap. Once I get into the tactics of Board Control (next article), I’ll explain how you work around those problems.

For now, though, let’s talk about how you properly advance with Rhinos to protect yourself using the Rhino Shuffle!

The Rhino Shuffle is basically applying the same concepts that we discussed in the last article about providing cover for yourself but doing it while you move your Rhinos. This is very much an art because the goal is to move your Rhinos as self-protecting blocks, and the artistry and geometry behind moving these vehicles to get them into the right spots requires a great deal of vision.

The bottom line is, though, that the lead Rhinos either should be getting cover from Terrain or be blowing smoke. Other Rhinos will be getting their cover from the lead vehicles.

When you leave your deployment, you start lining up, using lead Rhinos to provide cover for other Rhinos. Those in the lead start blowing smoke. We don’t blow smoke on the entire lot, though. The reason is that on the next turn of movement, we will use though who have not blown smoke yet to “swap” or “shuffle” up front to blow their smoke. Thus the Rhino shuffle. The next image shows where the second turn of movement goes. Notice how the ones that did not blow smoke in the previous image will be moving up front while the other fall into line behind them.

The overall key, you only need at most, 2 turns of movement to get anywhere. Usually, 1 turn actually suffices.

This is great providing the enemy doesn’t kill any Rhinos. What happens if they do? Easy, you walk up the passengers, use your own Rhinos to provide cover for them, and start the PEW PEW. Here’s the same as above except this time assuming 2 Rhinos bite it to enemy shooting.

We don’t worry about Rhinos that die. Why? Because a dead Rhino just becomes cover for our own troops. Once the Rhinos have gotten the troops where they need to be, we start using Board Control which is the art of blocking, getting cover, providing bunkers, etc. for our troops. From there, we unload with all those wonderful assault weapons we purchased. We use our own Rhinos to make it difficult for the enemy to advance, and we try to do as much damage as we can.

The next article will get a lot more into Board Control which are the extremely important tactics for making this work.

Lastly, keep in mind that even if you lose Rhinos on your deployment line, move + run your disembarked troops behind the Rhino’s as they advance. They’ll get to the fight either way! This is why it’s important to have a lot of Rhinos to make this work.

Lastly, I leave you with another list concept. This is just a fun idea to combine an Assault Khorne Element along with all the PEW PEW. We are basically substituting Plasma shots for Assault Units. The core concepts are still in place. 9 Rhinos. Overkill PEW PEW. Mostly MSU. This does slightly violate the rule about cheap units because Berserkers are spendy.

Posted by Neil Gilstrap at 1:37 PM