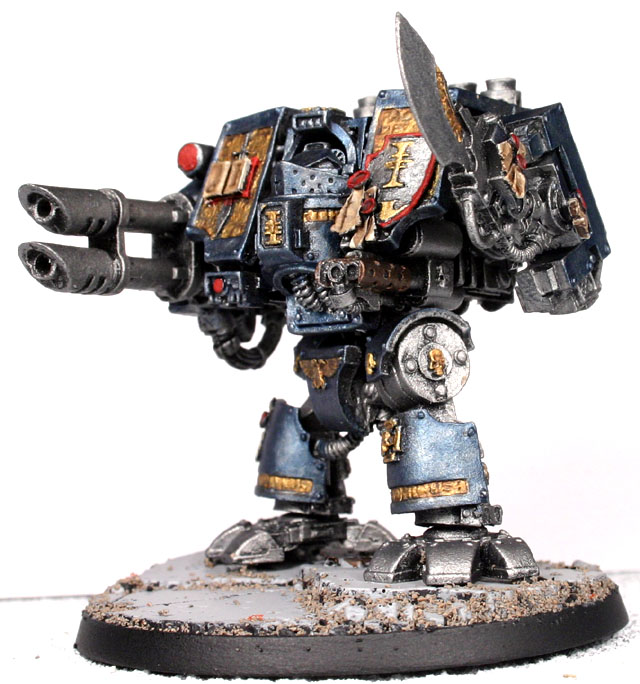 So, I’ve been thinking all week of what to do with my Grey Knight Deep Strike list. One thing I am very happy about with this list is that I am not seeing the list all over the internet, which tells me I either have a bad idea or a semi-unique perspective. (Probably just a bad idea! J)

Anyways, one of the major issues I have been kicking around is that of a Dreadnought with Twin-Linked Autocannons being able to draw LoS over the top of a Razorback. The problem here is that no matter what the rules actually read, people are going to have a problem with this. In a tournament, there really is no room for rules arguments. Experience has taught me that you are much better off refraining from using tools that you know will be contentious rather than thinking you will just rule argue your way through a situation. Just in the last year, of the tournaments I went to, I saw a judge make a bad call at half of them, once even on me. (Think I incessantly whined about it on the podcast at some point too!)

The point is, if you are going to show up with the intent of using something you know is contentious, expect to get shut down. Most of us really can’t afford to stop our games at a tournament for a serious rules debate to begin with because of the amount of time it takes to resolve it. Perhaps this is for another BLOG post, but I’m not suggesting you get bullied out of what is right but rather understand going in what will cause a confrontation.

I know trying to shoot over the top of a Razorback will cause a confrontation, and thus, it’s better if I just don’t try it.

So, what’s a Grey Knight general to do when one of the most powerful things about his list is getting all of his Dreadnoughts a 3+ cover save (with the Librarian in case you are wondering)? Well, I’m going to be doing 2 things, and I thought it would be worth sharing!

But One Arm Can Still See:

Part of what makes the Deep Strike list work is that most armies have a limited amount of Long Range threat. This is even true of Imperial Guard. Think about it. A Chimera can’t hurt a Dread, not reasonably anyways… especially not one that basically ignores Shaken/Stunned. Once the Vendettas are down and a possible few other targets, the Dreads are free to roam.

The Mathhammer on a Twin-Linked shot is that basically a twin-linked gun is approximately 33% better than a normal gun. So, a twin-linked is basically equal to 1.33 normal shot. So, 10 Twin Linked shots = approximately 13.3 normal shots. That’s more missiles than a Death Wing army generally brings. That’s as many missiles as most Space Wolf armies bring. So, when thinking, hey, you are only going to get 2 shots per Dread, keep that perspective on. 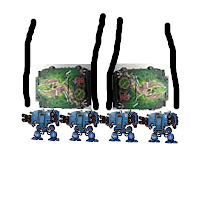 Denying Most of the Enemy’s Shots:

The other tactic I will probably be incorporating is dividing up my opponent’s fire. I might not be able to get cover saves from his whole army, but I can certainly angle my Razorbacks and Dreads to block most if. Here’s an example: 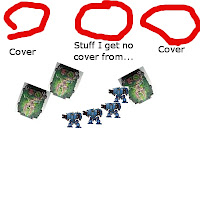 You have to imagine that so long as they are able, the Razorbacks and Dread can shuffle about and reposition so that only portions of the enemy will get to shoot me without me giving a cover save. Naturally, this will also be the portion of the enemy I am also going to be shooting at IN MY TURN, before they get to shoot me with no cover, and I will hopefully disable them.

Keep in mind the art of “tetris’ing” also applies to vehicles. Once one Dread is getting cover from a Razorback, he can provide cover for the Dread behind him and so forth. When you start using angles of attack, you will notice that one Dread in cover can provide cover against an entire angle that an enemy can shoot from.

Psybolt Dreads are just a huge boon for GK armies. The next article I write will be discussing all the things that make them so great.