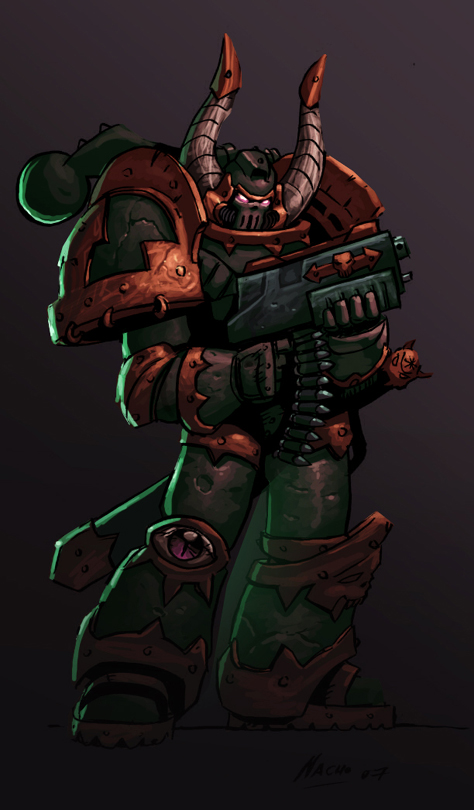 For Part 5 of this series, I’m going to discuss Board Control. Previously, I have discussed the basis behind the alternate list, what it looks like, critical deployment tactics, and critical advancement tactics to make it work. However, just deploying and getting into position still won’t win games. Once you are there, you have to play smart, and the best way to do that with this type of list is to control the board with your Rhinos, models, and shooting. I call these types of tactics Board Control. They aren’t limited to just those listed here or to this type of army, but there are several key tactics that must be mastered if you expect this army to perform.

Using Your Rhino as a Shield

It’s already know that a real safe way to fire assault weapons is out of the top hatch of a Rhino. That’s great if you only have 1 or 2 weapons to bring to bear. However, our Chosen and Havocs squads are at their most lethal when bringing 4-5 assault weapons to bear.

Imagine in the action movies where the Police come rushing up, leap out of their cars, and take up cover behind the engine block (or the bad ones where they take up cover behind a flimsy door and would, in reality, get PWNED if not by the bullets then the shrapnel of their door exploding as bullets pour through it). We are going to use our Rhinos in a very similar fashion.

Before I get into the first use, remember that cover rules are that half your squad needs to be in cover to get cover. So, for a 5 man squad, that means that 3 guys need to be in cover. However, our 4 man assault weapon units need to put out 4 weapons to the enemy. Use the front slant of a Rhino to get this done. Say what? Take a look at the next image. 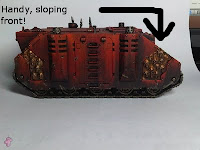 When you get out, get out on the side where the enemy is not. Put 4 of your assault weapons so that they can draw LoS over the front slant. The last guy goes anywhere. Now, you get cover and can still shoot. 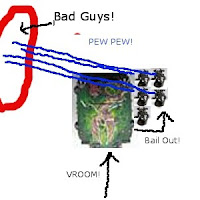 Another tactic is what I refer to as “Make a Wall.” It’s still the same concept as using your Rhino as a shield. The idea here is that you drive up, bail out on one side, using the Rhino to block LoS from the other side, and PEW PEW the opponent on your side to death. Then, the other enemy can’t draw LoS to retaliate. Like this! 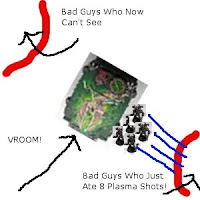 Now, imagine if we built a huge wall. We’ll call is the Great Rhino Wall of 40K! Rhino Walls are awesome because they block LoS, provide cover if not, and they prevent the enemy from assault the troops that got out. On top of that, if you have any smoke launchers left, use them. Even better, if they assault the Rhinos, they’ll need 6’s to hit. Even if the KILL the Rhino, they’ll have to go over diffuclt/dangerous in the assault phase to get to the troops which is not likely given the width of the Rhino + 1 inch away. 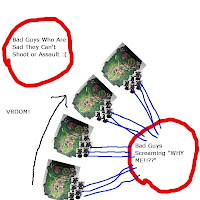 The above image also leads into Board Control tactic #2.

Notice how in the above image, the enemy line is now split. Your boys just jumped out to spray down the enemy with their nasty guns, and the over half of the enemy army can’t see to shoot, have to go through cover on what they might be able to see, and can’t assault it effectively. You have just driven a wedge into the enemy line.

The best part of this kind of tactic is the only portion of the enemy army that can fire back at you now is the part that you just sprayed down. Hopefully, you’ve done enough damage to significantly weaken their return fire. It’s called Board Control because you are controlling your enemy by denying him board space or building effective barriers.

When a Rhino explodes, it makes a crater. Climb into said crater and you get a 4+ cover save, and anything that assaults you now needs grenades or goes last. Handy.

You can use your Rhino to block the movement of your enemy. This is super useful to prevent the enemy from closing with you are assaulting you. Refer to the image above. Notice how the line or Rhinos creates a wall that the enemy cannot assault through?

Another super useful feature of Rhinos is simply to block the forward movement of enemy tanks. 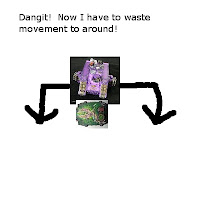 What happens when you park 2-3 Rhinos in the way in a line? He gets nowhere!

Use depleted or damaged units to find objectives and camp on them. Go to ground.

Deny Cover by Getting Right on Top of Them

Many times, you can deny the enemy cover by getting right on top of them. I call this a “Drive By”. You drive right up next to them, hop up, and unload. No cover because they are directly in LoS now. 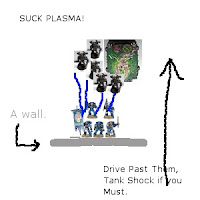 Remember that models in your own unit do not block LoS to the target. A lot of times, you can line up 3 of your assault weapons so they can see clearly through a crack. It doesn’t matter if the last guy can see clearly or not because over half your squad can see, and thus, no cover save.

Another use for Rhinos and Board Control is what I refer to as a Boneyard. This is basically scuttling your Rhinos into the enemy. The goal is as is shown in #4. However, you do this en masse and in layers, with Rhinos behind Rhinos. Why? Because when the enemy kills them, he creates a barrier of dangerous/difficult terrain between you and him that his assault units may have to negotiate or cause his vehicles to get stuck in. It’s a Boneyard, like a Junkyard, because all the wreckage creates a complete mess!

The idea is here to flood the enemy objectives with bodies and Rhinos to contest them. Then, you take one of your troop units and claim a single objective for the win. You can do this because you are normally depositing 40-50 bodies on the field.

Super useful! Don’t forget to use it especially against armies with Heavy back line elements like Guard. Nothing like pulling in from the side with 4 melta guns and taking out heavy units in the back.

This article is long enough! This hopefully just gives you some idea on the kinds of things you use for this type of army to work. I didn’t even get into terrain usage, more blocking, and lots of other tips.

For this list, I just wanted to do something that looked like dumb fun. I really wanted to put Abbadon and a Land Raider in the list. I couldn't reasonably fit it in and follow the rules unless Abby rides by himself. Then I got to thinking, what's he need a retinue for anyways? He's only like one the strongest ICs in the game? Bah! He can ride by himself. (BTW, if they blow up the raider, he walks behind Rhinos conveniently out of LoS. You don't need the Land Raider and could make him walk like Mephiston which would be much more points efficient and use the 220 to get another Havocs squad plus some.)

This list is not ideal at all for what I'm going for, but most of the principles are still in play. I still have 9 vehicles. I still have small, throw-away units. I don't have enough plasma, though. Hopefully Abby will take care of that. :P (He probably won't but it'll still be fun for a game!)
Posted by Neil Gilstrap at 1:43 PM