Thanks to Everyone at NoVA

Nova Open is one month away!

Hello Allan here, Nova Open is one month away an this is the state of my army: 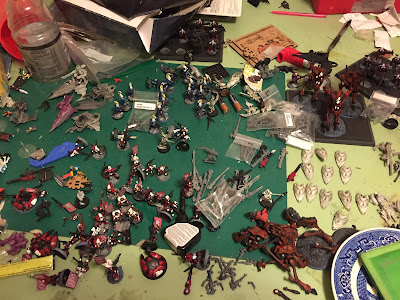 Lots of work to get done!
Posted by Blackmoor at 4:22 AM No comments:

I wanted to do something different for my Dark Eldar. Not content with the gloomy purple & black, I wanted to embrace a Neo Toyko look with wild Japanese motorcycle striping.

After reviewing several airbrush tutorials, one stuck out that demonstrated some of the best airbrushed models were not done because of the airbrush, but by how well you use an knife.

I plan to do the same technique on the my 1001 venoms and raiders. I will also attempt something similar on the infantry. More updates to come!
Posted by Tactical Terrain Eric at 5:07 PM No comments:

Had this notion come up several times in rules conversations over the past few days, and it has inspired me for a quick BLOG post and likely a little conversation on the next podcast.

There exists a fantastic list of canons which you not only can but absolutely should use when trying to make correct rules decisions for 40K.  The reason why you have to have a set of canons rather than a singular principle/canon (principle such as:  Read as Written, a principle which fails at face value and is easy to show why) is because the rule set, as we all very well know, lacks clarity, structure, and technical writing which is otherwise required.

In the presence of rules (laws) which lack clarity, if you want to arrive at correct conclusions when trying to rules arbitrate, you must apply an entire set of canons, one of which is Read as Written.  Another, and far more important in the land of rules arbitration, is the Right to Rules canon.


Right to Rules -  When making a rules decision, rule in favor of a model/unit having a right to use the rules it was given.

Sounds stupidly obvious, right?  A model or unit has a basic right to use the rules that it was given.  Derp?

Well, this issue comes up quite a bit when someone is trying to over-apply the Read as Written canon to rules arbitration.

I'm not going to use any of the specific examples that have come up (three in just two days) recently as I don't want anyone to feel like I'm picking on them.  Ineed, none of these issues were actually arguments anyways, just points of fact.  So, instead, here's a funny one that comes up regarding everyone's favorite Pylon Star.

Technically, in the rule book, you can only apply wounds from the wound pool to the target of a shooting attack.  However, as many tournaments have ruled that Death Rays (old death rays mind you) do not target models, thus conveniently ignoring Jink rules (another RAW application for another time), then according to the rules, the Death Ray cannot actually apply wounds to anything.

So, Read as Written, the Death Ray simply doesn't work at all.  Case closed!

And this is why Right to Rules is important and a more powerful canon than Read as Written.  Read as Written, the game actually can't be played at all due to above cases.  So, you must apply Right to Rules when making a rules arbitration that no interpretation of the Rules should end up in a model or unit not having the ability to use the rules it was granted.

Posted by Neil Gilstrap at 7:18 AM No comments:

Every year I make a featured board for the 11th Company GT (being held November 8th & 9th in Myrtle Beach, SC) and this year was no execption. Earlier in the year, you guys voted overwhelmingly for a Demon style board.

Now as many of you who listen to our podcast are aware, our fearless leader relocated midway through the year and the idea having this year's GT was in jeopardy. I took the time to book some additional terrain projects & of course ran several seminars at NoVA.

So when it was annouced the GT was back on, I was super excited as this this an excellent event. Then I realized: I have 3 weeks to create a Demon world!

With the hills & ruins being in oppositye corners, the thought was to to have each of these pieces themed after on of the 4 chaos gods. At center, there would be large towers similar to the opening pages of the codex, with mouths for doors and windows. Lastly, the difficult terrain would be a cross between a volacnic eruption and the earth spewing chaos energies from below.

One of my pet peeves is the lack of Xenos terrain. Xenos fortications are currently lacking as well. Creatively, they can be asset to battlefield both in protection units from withering fire and a great looking display on the table
One the hardest to duplicate is Eldar signature design. The Imperial Bastion is a big block of human might, while the Eldar are all about wispy compound curves. So when Alan asked to make him an Eldar Bastion in 10 days, I knew I was in for a challenge


As always, comments and suggestion are always welcome.

Some suggestions I would add:


Posted by Tactical Terrain Eric at 4:17 PM No comments:

Hello every one! Allan here with a question for everyone..how do you go about building an army for 7-8 GTs?


I plan on attending these tournaments in the next couple of months:


So here are some things that you have to take into account when building your army:


Missions
They will have have very different missions from BAO format, to Nova Missions, to the new Adepticon missions, book missions, and new made up missions.


Points
First off they are not all being run at the same points limit. Brawl in the Fall is 1750 points and the Feast of Blades is 1500. After the first two tournaments, everything east of the Mississippi River is 1850 points which makes it easier.


Allies
Some are not allowing Come the Apocalypse allies.

DetachmentsCADs and formations are all a mess. Each one is all over the map as to what you can take, and in what numbers. Some allow double CAD, some are 2 sources only, some are allowing you to self ally, etc.


LOW
Some are restricting what units you can take, and some are opening Pandora's box. Feast of Blades and Mechanicon are going full escalation (Hello Transcendent C'Tan!).

So how does one build an army to compete with all of those rules and restrictions?


So what you have to do is use the KISS principle and keep it simple.

Instead of doing a ton of research breaking down every mission (which i never do anyways), and read thought all of the different army construction guidelines to figure out what the optimal build is for each tournament, I will just have to build an army around the most restrictive rules for all of them and just have some fun.
Posted by Blackmoor at 5:16 AM 4 comments:

A lot of my customers have a clear idea what they want. Other give me an idea and we work together to come up with a completed idea. This is one of those collaborations. What started as "something Imperial" turned out to be something really cool for Texas Games Con. The basic idea was an Imperial City overlooking a large bridge, where the army would parade across the bridge. I apologize in advance I do not have as many "in progress" pictures as I was on a tight deadline to get this done. 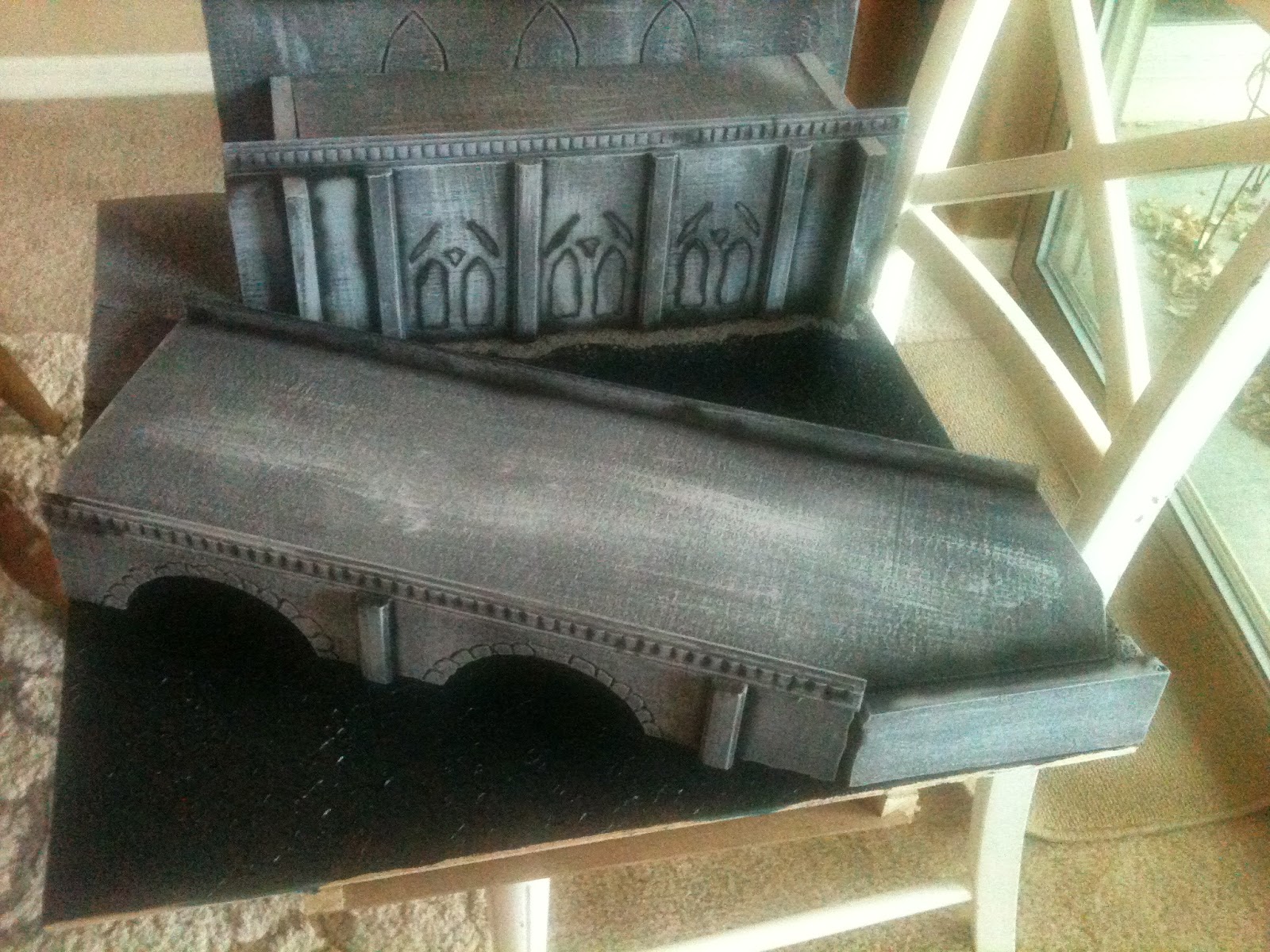 Posted by Tactical Terrain Eric at 5:39 PM No comments:

It would only be appropriate to do something ork-related with the new codex release. Here is a display board I did for Texas Games Con using a Mek Junkyard theme

It is not often I dabble in the Warhammer Fantasy Battles, I haven't played since 6th edition and have sold by Lizardmen, Dark Elves, & mishmash of Chaos and Beastmen. That said I have always had a soft spot for Skaven, which I use as my Hrud infantry (counts as Kroot). I have also been itching to take another shot a swamp terrain after doing a segment on a swampy Zone Mortalis boards. So when I had a request to do a Skaven Swamp themed display board. I was ready to go. 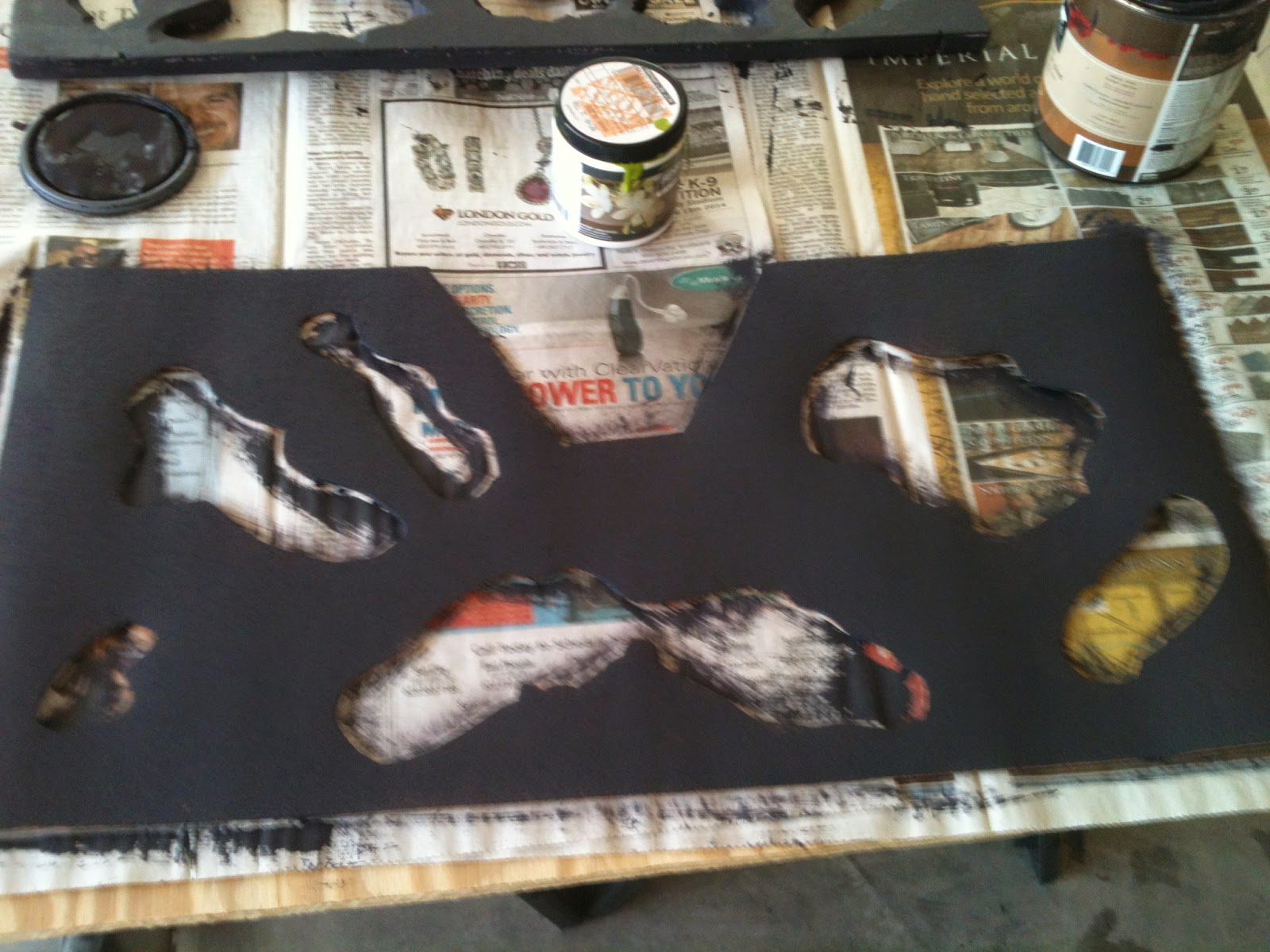 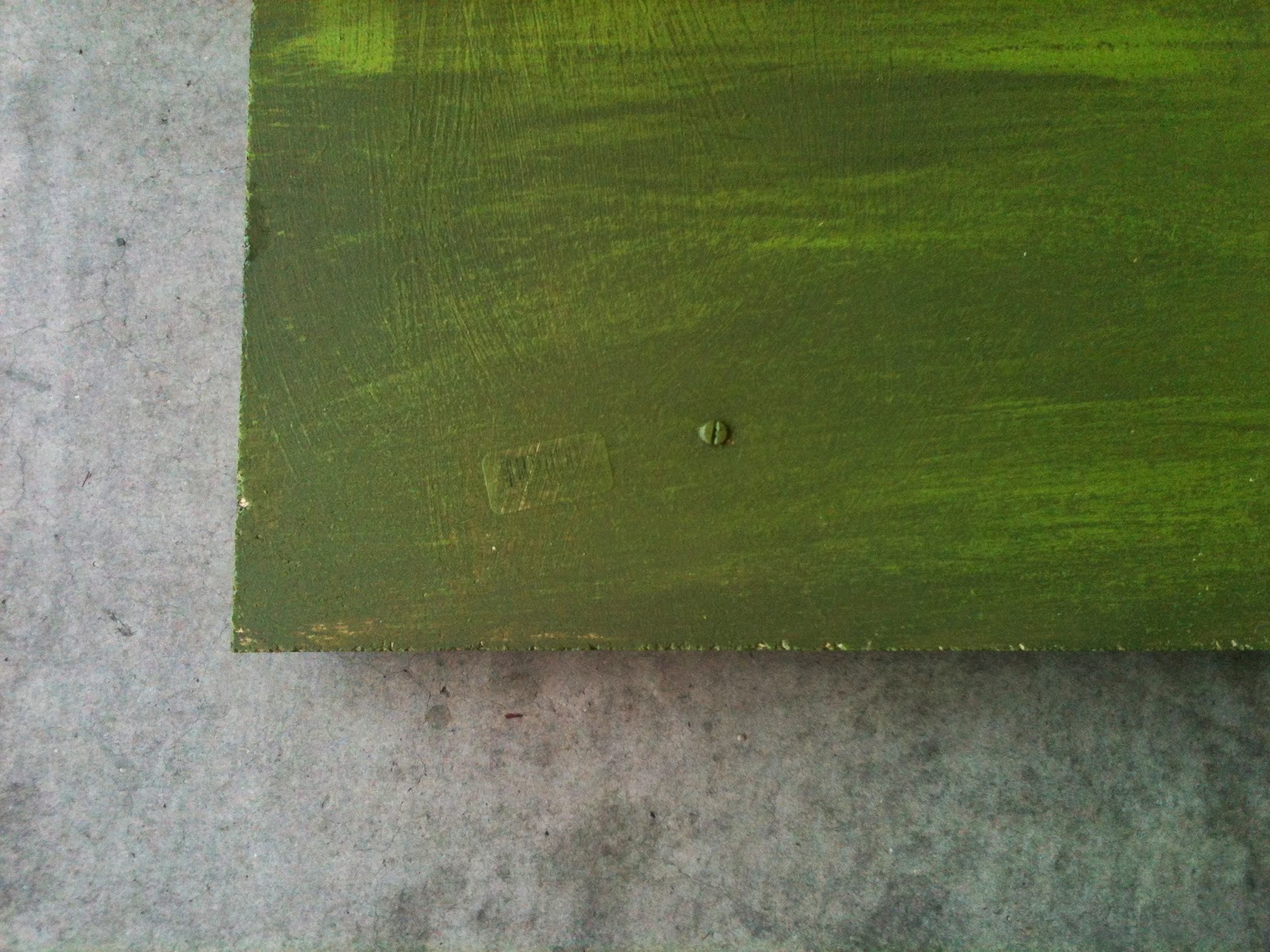 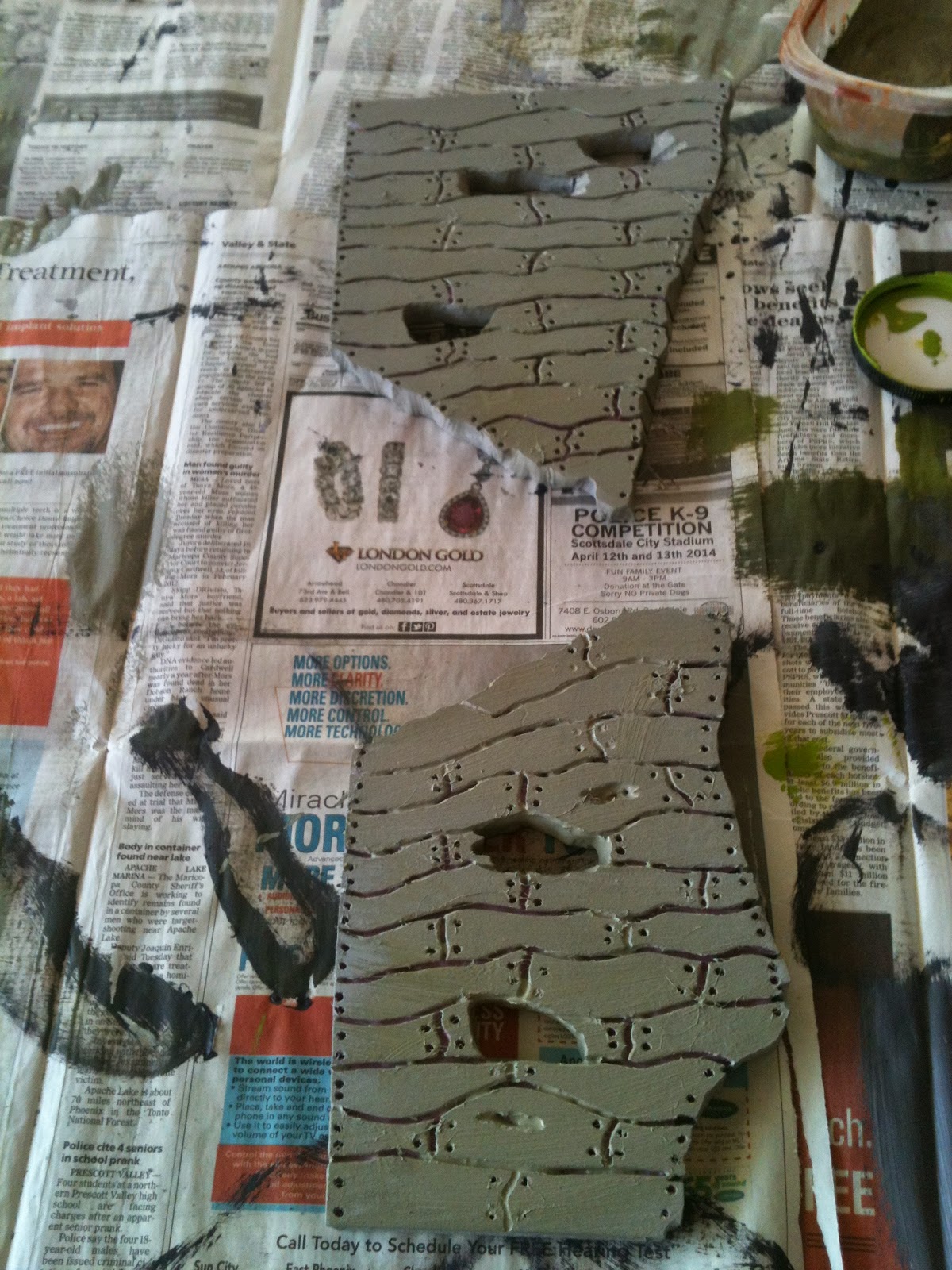 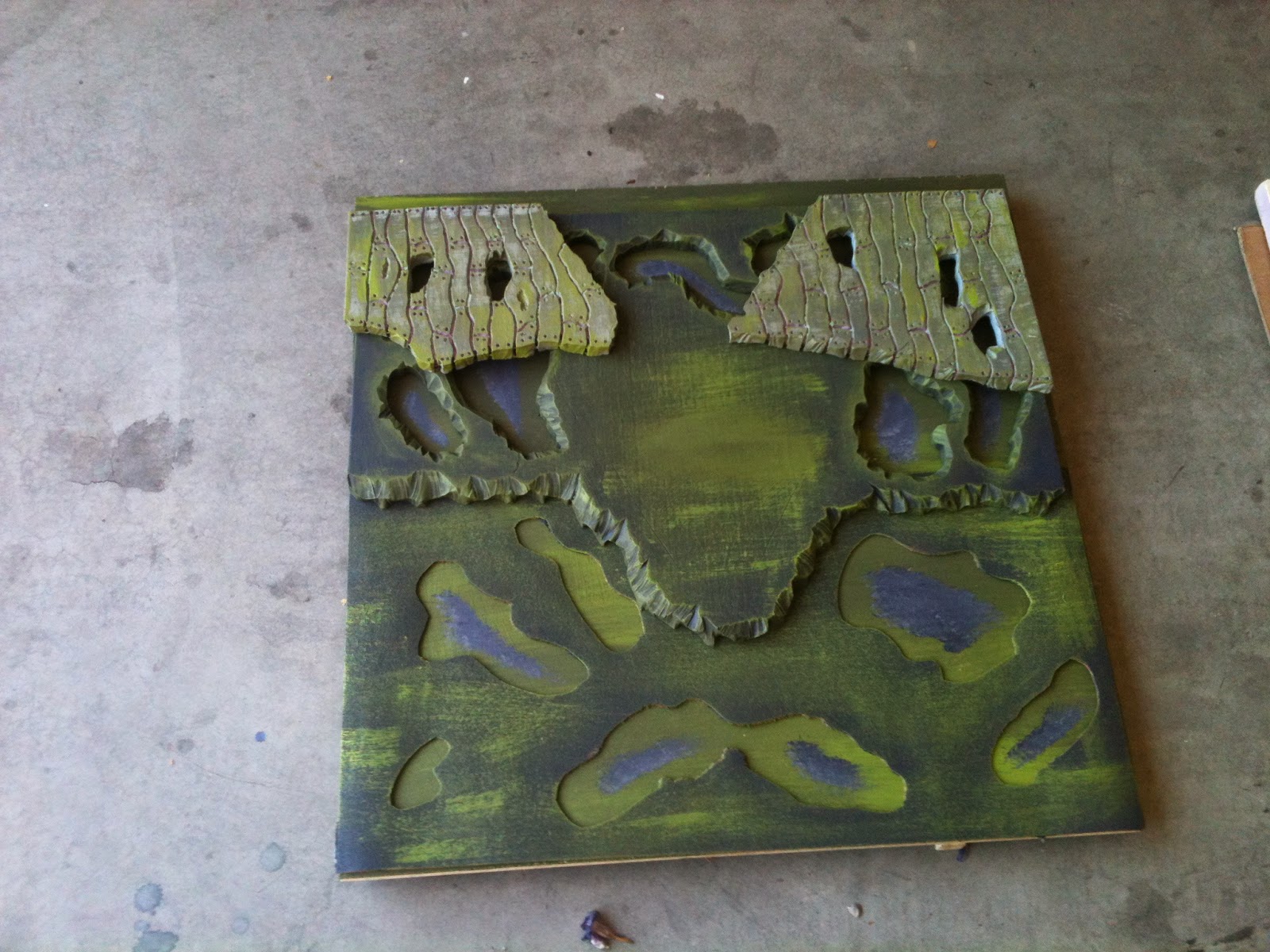 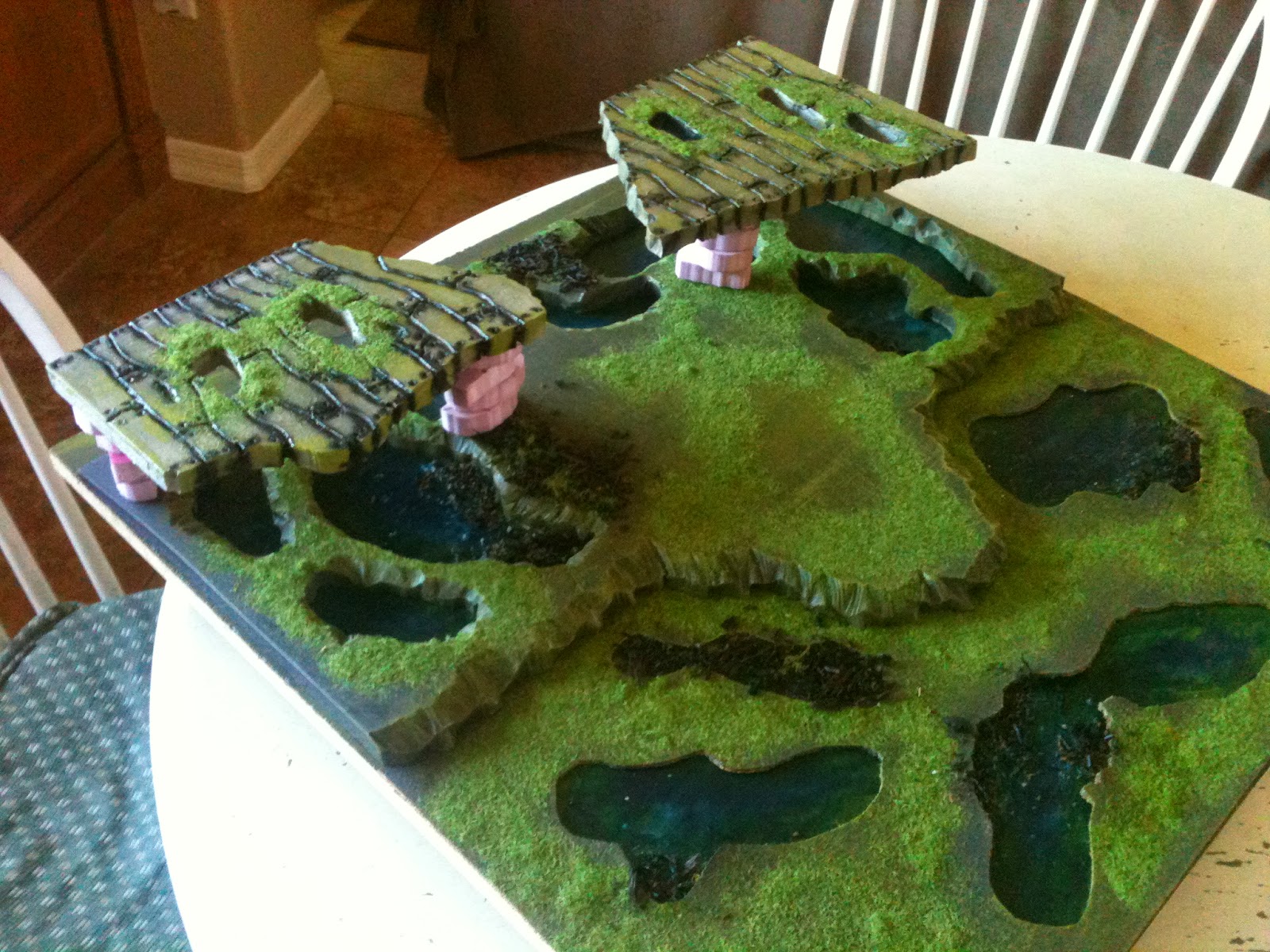 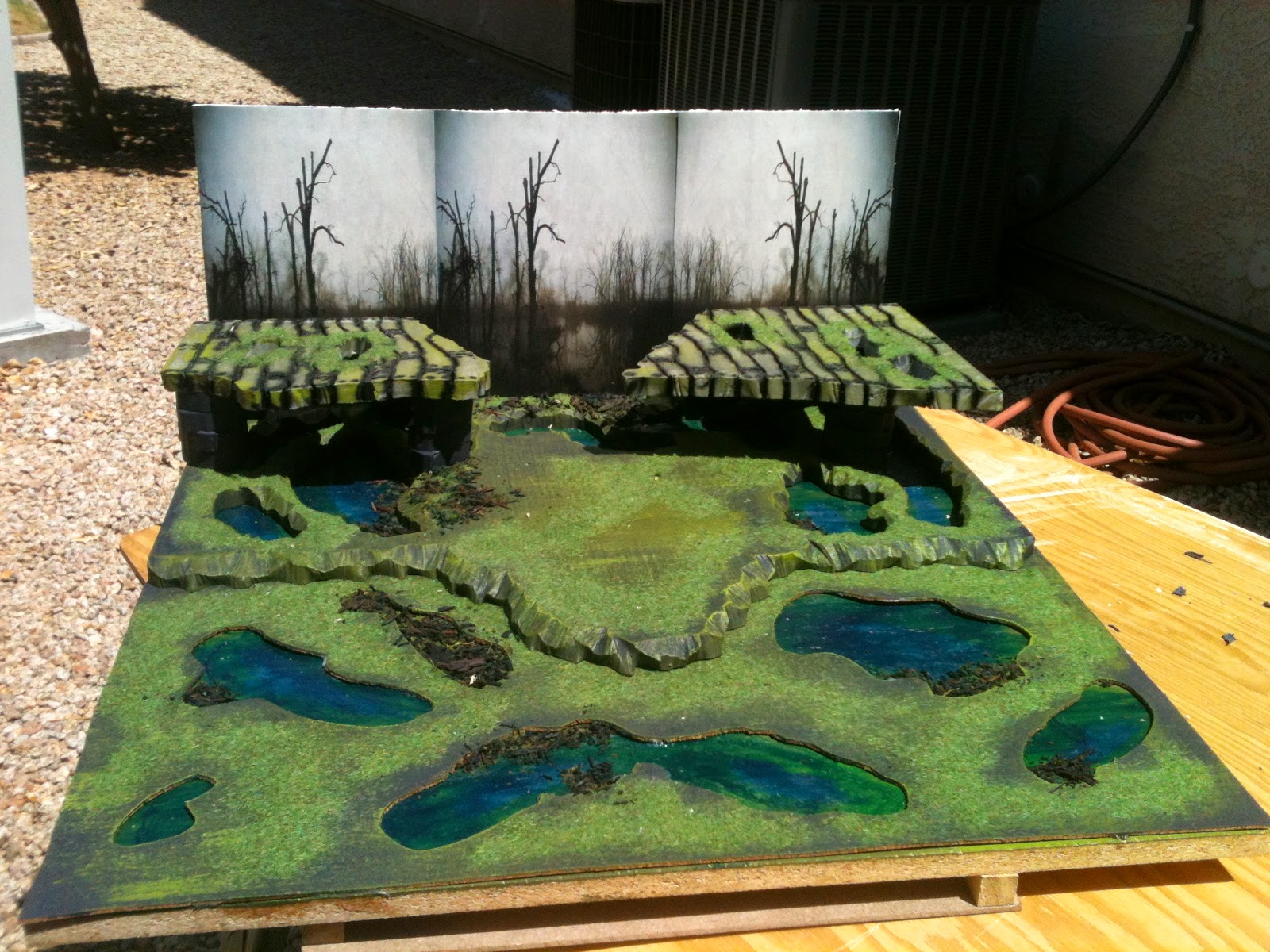 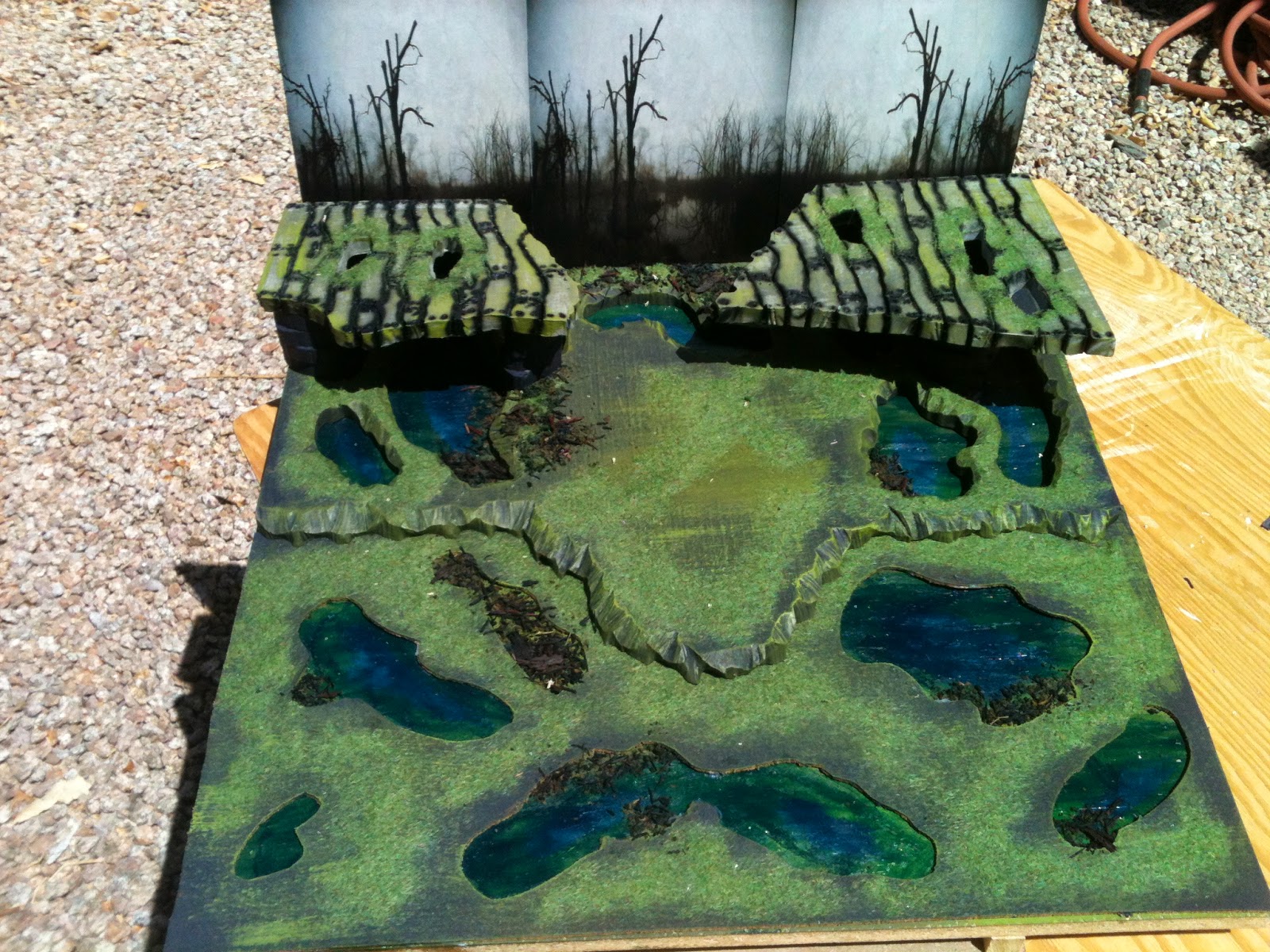 Posted by Tactical Terrain Eric at 11:24 AM No comments: